During the winter, Woodstock’s busiest place is likely Union Arena. And why wouldn’t it be? It is a location that invites passionate people of all ages, genders, and abilities to be active during months when many of us would rather hunker down.
In many ways, the rink’s role as a community space—and its success—is the result of the hard work of three people: Executive Director EJay Bishop, Assistant Director Kelley Ruch, and Facility Manager Gunther Sihler. Through their commitment to the building, the love of hockey in this part of the world, and an unlikely vision for a skating rink, Union Arena thrives.
A Longstanding Partnership 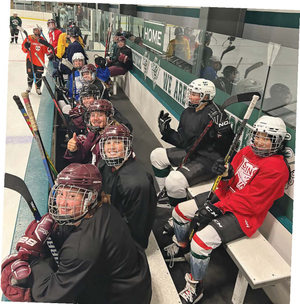 The arena is located next to Woodstock Union High School and Middle School and serves as the varsity team’s home ice. The building begins its day at six in the morning when the high school’s boys’ or girls’ varsity teams take to the ice for practice. The teams fortunate enough to sleep in some mornings use the rink after school.

Many varsity teams’ players may have first experienced the arena through Woodstock Youth Hockey. In fact, some of the seniors on the team may have been born the year after Union Arena opened in 2003. This ice has been a lifelong part of their hockey lives.
In an average year, 100 to 120 kids aged 5 to 18 participate in Woodstock Youth Hockey. When their possible future selves leave the ice after final varsity practices of the day, the youth hockey skaters and the skaters from Hanover Youth Hockey take to the rink for the next four hours. On Saturday and Sunday, teams in these programs play against teams from Vermont, New Hampshire, and a few from other New England states.

The bond between the rink and Woodstock Youth Hockey is a close one. The organization pays for ice time, and during the winter, they use it in some capacity every day of the week. However, EJay is hesitant to call them renters. “This place was really built for kids in the area,” he says, referring to Woodstock Youth Hockey as the arena’s partner.


Community, Fun, and Friendly Competition
Hockey, though, is not just a sport for kids or varsity teams. For many people, graduating from youth programs or high school or college teams didn’t mean graduating from hockey. 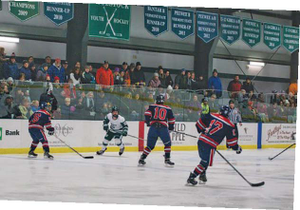 After the youth leagues finish for the day, the adults take to the rink at eight in the evening. By that time, the arena has been active for 14 hours and will be for another three. Adult hockey enthusiasts play in four leagues: one for men, one for women, and two that are co-ed. Of these, the C league is the less competitive co-ed league. It attracts women who might have started in the women’s league because “it adds a little structure and a little more competition and speed,” Kelley says. “Though they care about the wins and losses, it’s not going to make or break it. They leave with smiles on their faces.”

The C league is also great for parents who have become interested in hockey because their kids have started playing. Kelley also notes that “new people who have moved into the area find the league an environment to meet people.”
But it’s not just parents who play. It’s also grandparents, adults, men in their seventies who come out for the love of the game, a little competition, and community. “It’s definitely social,” EJay says. “It’s nice to see people from their twenties into their seventies hanging out together.”
Another group that uses the rink is the Puck Hogs, a group for women of all experience levels who enjoy the game through scrimmages and helping others improve their skills. Kelley notes that the women “go out there, have fun, laugh a lot, and don’t take themselves too seriously.” With a name like Puck Hogs, how could they?

Of course, there is more to do on ice than play hockey. The figure skating program, run by the Union Arena Skating Club, attracts upwards of two dozen participants ranging in age from as young as three to as old as 65. The Upper Valley Curling Club also uses the rink in the summer when the arena is open for several weeks.
For people who enjoy the simple pleasure of skating for exercise, relaxation, or nostalgia, the Union Arena is there for them on Sunday mornings. The rink is also available for birthday parties or other celebrations.
A Net-Zero Rink
All the skaters and organizations that use the rink provide income to help keep the Union Arena afloat. However, a skating rink’s unique environment requires a lot of money to maintain it. 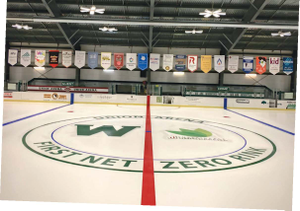 The arena is a vast open space that, at the same time, needs to be cold enough to keep the ice frozen and warm enough to keep the people in it from freezing. Creating two climates simultaneously makes Union Arena—and any skating rink—a huge energy consumer. Even when energy was cheaper than now, these competing requirements present a substantial financial burden to the arena.

Despite the challenge, Harold Mayhew, the building’s architect in the early 2000s, committed, in 2014, to make the rink’s energy use and energy production equal, or net-zero. Solar panels installed on the roof and equipment upgrades that reduced energy use slashed the arena’s energy bills. These changes reduced the reliance on rental fees to keep the arena operational. After seven years of work and renovation, Union Arena became the first net-zero hockey rink in the country. EJay says that Harold said it right when he noted, “If you can make a hockey rink net-zero, you can make anything net-zero.”
Despite the challenges it faces, Union Arena meets three goals. It satisfies the demands of everyone who wants to use it, provides a community space, and serves as a reminder that even the most difficult challenges regarding energy use can be conquered. In hockey, they call that a hat trick.

Public Skating
The rink is open for anyone who wants to skate on Sunday mornings from 10:10 to 11:30am. On December 11, Union Arena welcomes a special guest as Santa Claus dons his skates for the return of Skating with Santa.