It’s All About the Cruller: Enjoy One Soon at Farmer & The Bell It all started with a delectable French cruller. “We were on a camping trip in Maine and stopped at a café and had a French cruller. It was so amazing—light, airy, but custardy and crispy. The whole combination was so good we said, ‘This is it. We’re going to try making this,’” says April Lawrence, who, along with her partner Ben Pauly opened Farmer & the Bell in Quechee.
During the pandemic, April and Ben were looking for a passion project to learn a new skill that also involved something that tasted good and was not readily available. A donut shop fit the bill. They started with a pop-up shop in Woodstock in 2021 and then moved to the Parker in April. “We’re very self-taught. We started with a KitchenAid mixer, and we look back and laugh at how far we’ve come,” says April.
Elevated Donuts 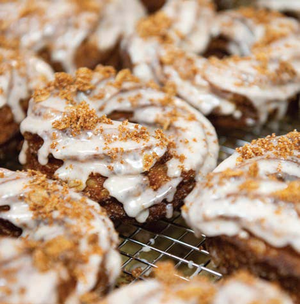 Open only on Saturday during the winter, they make between 800 to 1,000 donuts a day and have lines of customers waiting for their crullers. April clarifies they make French crullers, not donuts, using a distinct pâte à choux pastry. “People are surprised when they bite into it because it’s crispy on the outside and light and airy and custardy on the inside. We use lemon zest and French Madagascar vanilla bean paste. It’s such a unique flavor and texture,” she says.

Ben describes it as an elevated donut. “It’s a way for people to indulge and have a tasty treat. The enjoyment is having one standard, very decadent donut with all these flavors,” Ben says. The crullers are piped, fried, and then topped with either a glaze, a sweet spice, a caramel, a crumble, or a combination. Each week the shop features six different kinds, including two standard flavors, Maple along with Sugar & Spice. The other four change frequently to offer seasonal flavors.
Farmers and Family
The crullers are made with ingredients from local Vermont purveyors, including King Arthur Baking Company, Cabot, and Pete & Gerry’s, and McNamara Dairy in New Hampshire. “Ben and I have farming backgrounds and we feel very strongly about where our food comes from and celebrating the growers who help contribute to our menu,” says April. 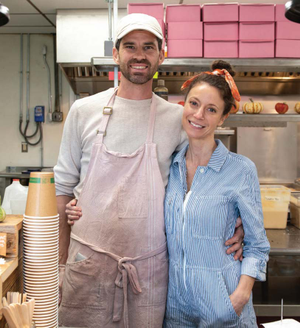 It’s been a labor of love. April, Ben, and his mother Anna, along with a team of friends, start their weekends making crullers at 3am. Ben’s dad David helps when needed. “Our son Gray, who is eight, helps out too. He loves it,” says April, who prepares glazes and handles behind-the-scenes work during the week. “It’s such a tight-knit group of people and it’s an enjoyable experience. We put on good music and it’s a fun time to hang out together and sling donuts while we’re doing it,” adds Ben.

Homemade savory croissants are also on their menu, including a Farmer’s Croissant filled with North Country Smokehouse bacon, smoked cheddar cheese from Billings Farm, and herbs from their small garden, and a Forest Croissant filled with sage, mushrooms, and butter cheddar from Billings Farm. Hot and cold-brew coffee and raspberry lemonade are also available.
Bringing Joy to the Community 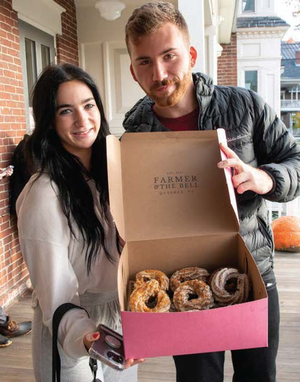 Both April and Ben have a strong background in design and creating experiences. “Both of these things have been persistent throughout our lives and certainly hold true with creating our circles of goodness, which we call French crullers,” says April, who previously designed porcelain dolls for Disney and owned a home goods store. Growing up at her grandmother’s bed and breakfast, Lakeshore Farm, helped her hone her cooking skills. “I took a lot of those practices away with me—meal and menu planning—and a sense of community of how my grandmother brought people together around the dinner table and great conversations happened,” she says. Ben grew up on a farm and is the creative director of landscape and design at the Woodstock Inn & Resort. “I’m moonlighting on the weekends with April to be her donut-frying master. Ever since we met, we’ve been trying to figure out a way we can do something together and everything clicked.”

April and Ben appreciate all that they’re learning and how supportive the community has been since they opened. “We love being here. It’s a beautiful setting. It just feels incredibly good to make things that are joyous, and we want to give people a great experience and to leave feeling warm and fuzzy,” says April.
The couple sees an endless opportunity for growth and creativity. “That’s why we started out small and work to perfect it. We look forward to developing and adding new ideas and growing the business,” says Ben. April agrees. “We know this is a good temporary home and we’re excited to continue. We feel very fortunate to have personally fallen in love with this style of donut and now other people love it as well.”