Sometimes it’s nice to throw skis in the car and get away for a few days. The ski area doesn’t need to be huge, but a little bigger than the Dartmouth Skiway makes for a nice change. Something not too crowded, not too expensive, with good snow, slopeside lodging, fun places to eat, nice people . . . I found just that place, about 300 miles (four and half hours) north of Hanover, at Stoneham Mountain Resort in Quebec. 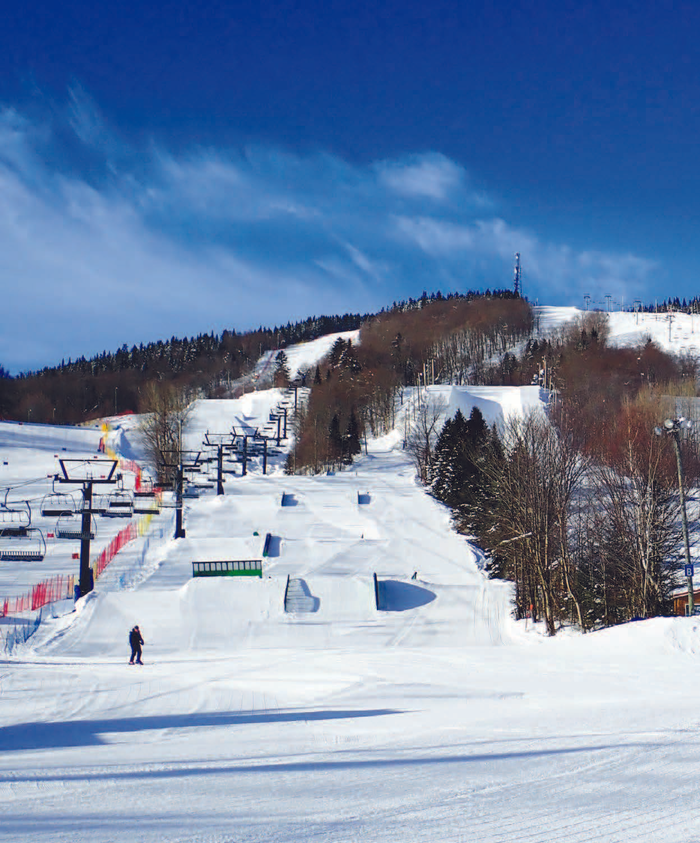 Why go that distance when there are dozens of closer skier areas? The drive is relatively easy, straight up I-91 to the Canadian border, then Autoroute 55 to A20. With the US dollar’s current strength, it’s a bargain. What’s more, Stoneham Mountain Resort is located about 20 minutes north of Quebec City, where you can also immerse yourself in the Quebec-French culture, and you might just find yourself in a winter festival that’s like Dartmouth Carnival on steroids.

Stoneham Mountain Resort was founded in 1963 by a group of skiers from Quebec City who teamed up with several businesses in nearby Trois-Rivieres. They cut three ski trails, which are now part of a 43-trail network across three peaks. Stoneham tops out at an elevation of 1,946 feet, about the same as the Dartmouth Skiway, but with a couple hundred feet more vertical drop. Snowmaking covers 86 percent of the ski area, and there’s night skiing on 19 of those trails.

Last winter, I visited Stoneham for the second time in two winters. It’s an inviting place to return to. The mountain skis a lot like Mount Sunapee, but with a French flare. And with 40 inches more natural snow! Sunapee gets an average of 130 inches per year versus Stoneham, which gets 170 inches. The conditions were excellent both trips.
On my first visit, I was unsure where to start. Like picking a bottle of wine based on its label, I picked what trails to ski based on their catchy names, starting with a trail called La Rock ’N Roll. “I love classic rock,” I thought, and pointed my skis down this wide top-to-bottom groomer off the L’Eclipse chair. As my skis cut big arcs below the lift, I smiled inside my neck gaiter. This was a sweet way to roll!
The Cold 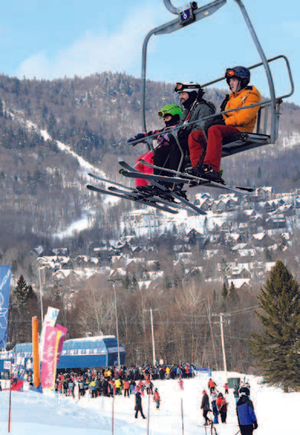 My neck gaiter covered my face below my goggles, mainly to protect it from the cold. It can get downright frigid at Stoneham, well below zero, but no one seemed to mind. As one Quebecois told me on the chairlift, “if you stayed inside every cold day in the winter, you would never go outside.” While I don’t particularly like to ski in the cold, it was easy to embrace whatever Mother Nature threw at me at Stoneham when the prevailing happy attitude was also weatherproof.

I worked my way across the three peaks, sampling other trails like one called Jacques Cartier. I felt akin to this famous French explorer, the first European to sail up the St. Lawrence River during the 1500s. Like Cartier, I’m an explorer at heart, though on that day, I sailed down ski trails rather than rivers.
A little later, I bombed down a black diamond called La Bomba (“The Bomb” in English), mostly because of its name. Actually, the pitch and moguls required more of a dance from edge to edge reminiscent of the Ricky Martin hit “La Bomba” than letting ’em run like a downhiller, but this short, steep trail was, indeed, the bomb!
The Carnival 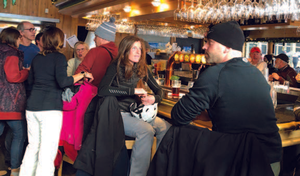 After skiing for several hours, I worked my way back toward the main base lodge, intending to have a late lunch in either the cafeteria or the slopeside pub called Le Quatre Foyers. The cafeteria was quiet, but the pub was busy, perhaps due to the cold. Groups of skiers and snowboarders mingled by the fireplace and around the long, rectangular bar. I smiled when Joan Jett belted out “I love rock ’n roll” from unseen speakers around the large, popular pub, and thought about my first run of the day.

An hour later, my appetite sated by a brick-oven pizza topped with sun-dried tomatoes, spinach, mozzarella, and a balsamic drizzle, I headed back to the slopes, though I never put my skis back on. The entire base area had transformed into a kids’ carnival! Small children giggled inside large, inflated bouncing bubbles. They slid down miniature snowboard rails, and hopped inside the snowcats (grooming machines), which were parked close by, doors open. I couldn’t resist climbing onto the driver’s seat of one of the cats. It was easy to imagine the driver manicuring the mountain for skiers like me.
Another Carnival
I was so enchanted by my first ski trip to Stoneham Mountain Resort, that I went again last winter, I happily braved the subzero weather to carve turns on La Rock ’N Roll and Jacques Cartier again. I enjoyed my second dance down La Bomba, but I was less excited about eating every meal at Le Quatre Foyers and at the base lodge. The food was good, but the repetition was uninspiring.
“Let’s eat in Quebec City,” suggested one of my skiing buddies who was staying in the city at Le Concorde Hotel. The hotel was one of the tallest in the city (26 floors) and had a revolving restaurant on the top. 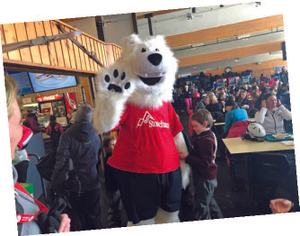 Several of us made the quick 20-minute drive into Quebec City, eager to try a new spot. As luck would have it, it was also Quebec’s winter carnival, the world’s oldest and largest winter carnival, which takes place each year in February, similar to Dartmouth Winter Carnival but on a grander scale.

Quebec’s winter carnival dates back to the late 1800s. There are numerous tournaments, including snowboarding, ice canoeing, snowshoeing, hockey, and dogsledding, plus many free outdoor feasts, a snow sculpture competition, and a traditional bain de neige (snow bath). As we sipped “caribous”—a hot drink in honor of the carnival made of red wine, whisky, and maple syrup—from atop Le Concorde, we watched the various scenes from the winter carnival come into view below us. Kids reveled at the many rides in one park. People cross-country skied in another. A band played in a third, as a few hundred people clapped and swayed to the lively music. Like Stoneham Mountain Resort, the entire city exuded a contagious joie de vivre.
The next day, I rock and rolled a few more times at the ski area and then headed for home. Stoneham Mountain Resort was a refreshing getaway. The skiing was good, and the vibe was even better. 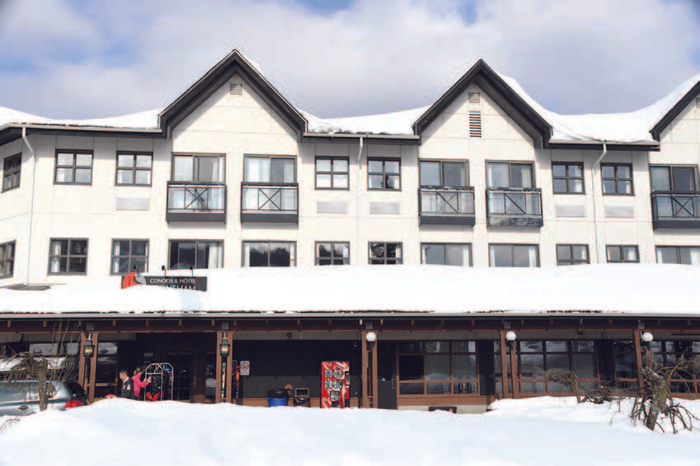 KNOW BEFORE YOU GO

Stoneham Mountain Resort can be very cold, particularly in January and February, where the daytime high averages in the teens and the average overnight low is below zero (F). Dress warmly, cover your face, and watch for frostbite.

Use a credit card that does not charge a foreign exchange fee.

If you want to ski at night under the lights, bring clear or very pale goggle lenses.

If you wish to stay in the Hotel Stoneham, book early. The hotel fills on weekends and there is limited lodging—mainly some condos—close to the slopes besides this hotel.

There’s a good grocery store in the village of Stoneham-et-Tewksbury. No need to bring much additional food from home.

You need a valid passport to enter Canada.