Farm-fresh food, creative libations, and a 120-year-old train depot turned restaurant bring locals and tourists alike to the charming Windsor Station restaurant in Windsor, Vermont. Husband and wife Jon and Stacy Capurso are the team behind the delicious food and appealing drinks—he is the executive chef, and she is the front of the house operations manager. Now starting their tenth year in business, the couple has found the perfect recipe that brings diners back week after week for an exceptional dining experience in a one-of-a-kind historic venue.
Jon and Stacy have been Hartland residents for the last 21 years. Prior to Windsor Station, they owned and operated the beloved Stella’s Restaurant in Hartland for six years. Jon grew up in Rhode Island, Arizona, and Texas, where food and cooking were always part of his family, dating all the way back to bootlegging through his family’s restaurant during Prohibition. Stacy grew up in the southern tier of New York. She was raised in a strong Polish community where her mother hosted family parties and her father owned a local bar. She graduated from Elmira College with a double major in business management and economics.
“We decided to buy the place because were looking for more of an evening operation,” says Jon. “The space had been vacant for about two years. We discovered it was available and put all the pieces together.”
A Modern Historic Space 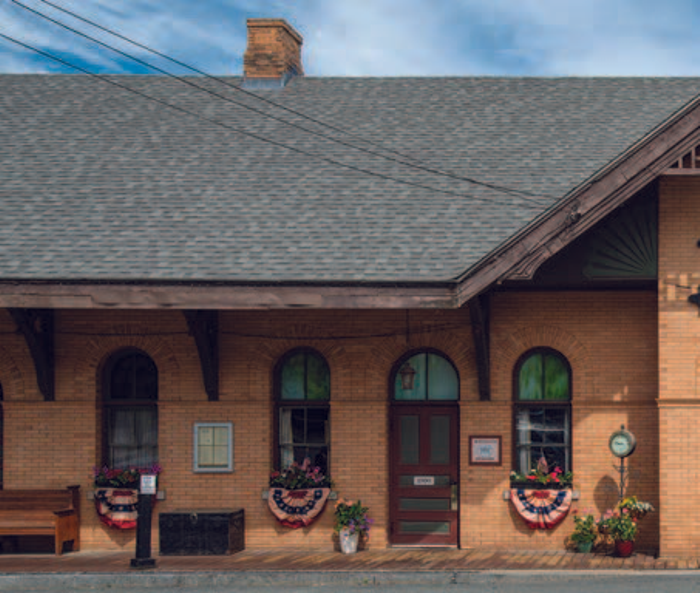 In the 1800s, Windsor was among one of the stops on the Vermont Central Railroad due to its importance as a manufacturing town. After the original station suffered extensive damage in a fire, the railroad built this present Windsor depot in 1900, opening its doors on January 1, 1901. Located in the historic district of Windsor, it is on the National Historic Register.

“At the time, this was a modern building; it had electricity and hot water,” says Jon. “They took the time and money to make it the centerpiece of the town. And to us, it still is. The station was restored and converted into a restaurant in 1977, but we have continued to modernize it. We have put a lot of time, effort, and money into preserving and renovating the building so it can function as a restaurant but still be a historic space.”
Seasonal Food and a Nod to the Past 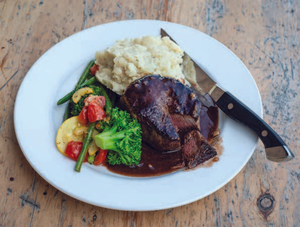 The food at Windsor Station is often sourced locally and always fresh and in season. “Being part of the Vermont Fresh Network, there is a responsibility that we buy a good portion of our food from local sources for better and higher quality,” says Jon. “We buy our provisions locally such as beef, vegetables, honey, eggs, and maple syrup.”

The menu is full of comfort food that is made completely in-house. Windsor Station offers five to six fresh pastas every day, one of the aspects that makes them special. A customer favorite is the Basin Street Alfredo, made with chicken, andouille sausage, and shrimp in a Cajun cream sauce with homemade linguine. 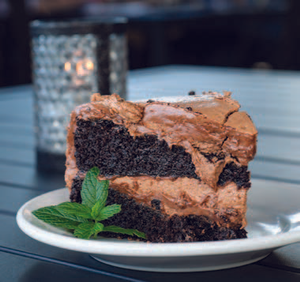 Many people come in for the local craft beers and spirits and Stacy’s signature libations. “All of our specialty cocktails have always featured Vermont Spirits, and some I dedicate to the spirits of our past,” says Stacy. “The martini named after Elijah West, who owned the old Windsor Tavern in 1777 where 72 delegates met to form the Republic of Vermont, is popular. We have one for Romaine Tenney, who in 1964 protested the building of I-91 that cut right through his farm in Ascutney. The night before they were due to bulldoze through his property, he burned it all down with himself inside. In the original recipe I used Wild Hart Distillery Burning Embers Vodka, switchel, and apricot juice and it was topped with Alice & the Magician Bonfire Cocktail Aromatic, so you can imagine the smell.” 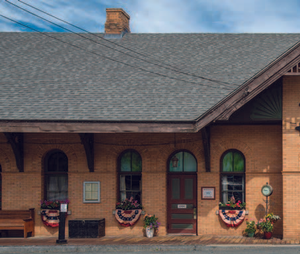 Stacy continues, “We did a lot of historical research when we bought the restaurant, which has inspired these cocktails. One of our best sellers is the Virgil Ferguson, named for the ghost who haunts the station. It is made with Smugglers’ Notch bourbon, muddled oranges, rosemary, and simple syrup topped with a rosemary honey spray.”

Jon and Stacy admit there is a ghost who has been quiet for the last few years. In the past, people have been shoved, paper towels in the ladies’ room have moved, and the door has locked itself from the inside. One day the ghost spelled his name out on the Ouija board. Jon and Stacy did some research and found out a Virgil Ferguson had died in a train accident.
Unlimited Potential
Whether for the food, the spirits, or the “spirits,” Windsor Station is a success in the up-and-coming downtown. Jon is on the board of directors for the Windsor Improvement Corporation and sees the potential that Windsor has for more businesses in the center of town.
“The future could include connecting the historic downtown area to the Artisans Park where Harpoon, Simon Pearce, Silo Distilleries, and Blake Hill Preserves are located. We would like to expand the business potential for a proper downtown. Over the years our customer base has expanded with locals and a spike in tourists and visitors to the area. We are not that far off I-91, so we get people traveling through or staying in the area. There’s unlimited potential for us and for downtown Windsor.
“We are creating a special experience here in Windsor,” says Jon. “What I hear the most from people is how well the staff takes care of them and makes them feel like family. They can get their favorite table, and the staff knows their names, so they feel at home. Not a lot of places in this area have what we have to offer. We focus on value, pair it with quality, and give people what they want.” I 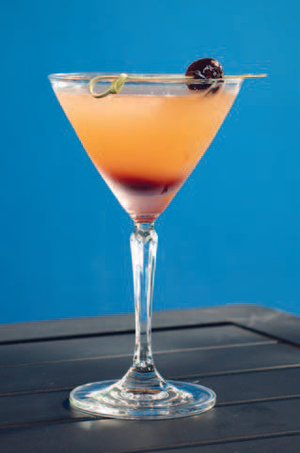 A popular cocktail that is currently on the list is Cecilia Gullivan. Murdered in the early hours of Nov 7, 1926, she was an executive at Windsor’s Cone Automotive. Wounds to her face were so severe that they removed her head, preserved it in a jar, and put it on display as evidence. Cecilia watched her own murder trial.

This martini is made with Barr Hill Gin, Solerno Blood Orange Liqueur, basil simple syrup, and grapefruit juice that are shaken and poured into a martini glass. Metcalfe’s Raspberry Liqueur is added at the end so it sinks to the bottom (like blood). It’s garnished with one Toschi cherry on a pick that drips into the cocktail.
“One night in July, descendants of Cecilia drove up from Massachusetts specifically for the cocktail and had a wonderful time talking to their server about it. They visited her grave and let us know that the head of Cecilia had never been found. I just love this,” recounts Stacy.
Windsor Station
26 Depot Avenue
Windsor, VT
(802) 674-4180
windsorstationvt.com
Windsor Station [14 Images] Click Any Image To Expand