Autumn in the Upper Valley is a magical time. By late September, the forests turn from a faded green to a calliope of crimson, orange, and gold. There are other places across the northern half of the United States that put on a colorful fall show, but thanks to New England’s ubiquitous maple trees, the eye candy is irresistible—and oft photographed. Everyone has a camera nowadays on their cell phones, and we all pause to take a shot of a particularly vibrant leaf, a stunning tree, or multihued panorama. Those of us who are more serious about photography have bigger “black” cameras—DSLRs or mirrorless—with changeable lenses to capture the moment. Yet often the photo is not nearly as satisfying as the subject was to your naked eye.
How many times have you taken a photo during fall foliage season only to be disappointed when you look at it later? Perhaps the color looks duller, or the scene just seems muddled or less inspiring than it felt when you were outdoors in that special spot.
The basic principles of photography apply to fall foliage, too, particularly composition and lighting. Follow these tips, and you’ll take autumn images worth showing off. 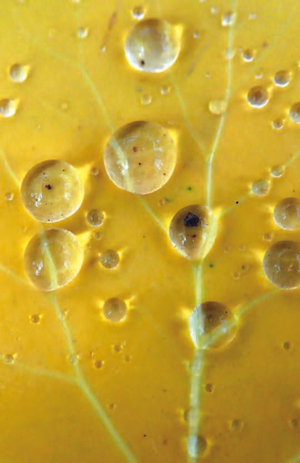 If you find a particularly pretty leaf lying on the ground, zoom in for a more creative shot, like this aspen leaf after a rain shower. The magnification of the leaf surface through the raindrops adds an intriguing abstract feel to the photo that draws the eye. Notice that the main vein of the leaf is not centered, but on the right third of the frame—the rule of thirds again! 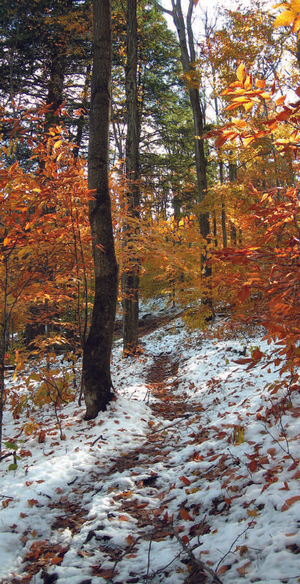 When photographing a stream or river, preventing the waterway from flowing out the corner of the frame is another canon of composition. The water can run out the side or the bottom, just not the corner. The same is true with other things that “flow,” such as the snowy trail in this photo, the log on the opposite page, or the veins of the aspen leaf in the macro shot above. By now, you’ve probably noticed the rule of thirds in this shot: the darkest tree trunk is on the left third of the frame. Interestingly, even though this is a lovely fall foliage image taken after the first snowfall, the foliage is really the background. The trail is the main subject. Not all eye-catching fall photos feature the leaves. 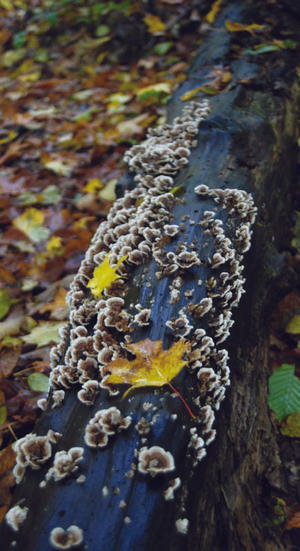 Another basic rule of photo composition is to lead the viewer’s eye from the bottom left to the top right of the frame. Leading the eye gives depth to the image. The picture feels three-dimensional even when it is printed on a flat page of a magazine or mounted in a frame. In this photo, the log leads the eye from bottom left to top right, while also following the rule of thirds. The edges of the log are on the vertical thirds of the frame. What’s more, the yellow maple leaf on the log, which is the main subject, is on the bottom third of the frame, not bull’s-eye centered in the photo. 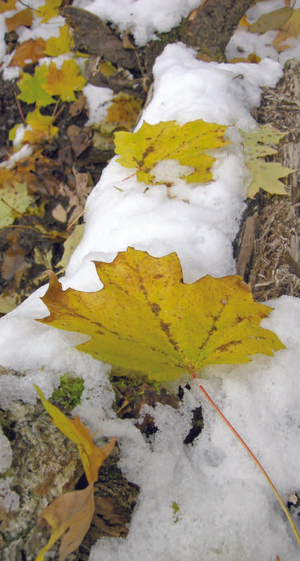 Here’s a different shot of maple leaves and early snow. Notice the even lighting and the fact that the snow has texture. It’s easy to blow out snow or create a “hot spot” in a photo, particularly if it’s midday and the sun is out. All photographers love the “golden hour,” just after sunrise and just before sunset, when the light is rich, but you can successfully shoot fall images any time of the day if there’s a high layer of clouds creating even light. The key is to avoid images that show a monotonous white sky, or simply get closer, as I did in this shot. By now, you can also see the rule of thirds and how the bold elements of the image—the snow and yellow maple leaves—lead the eye. In this case, it was also important that the bright snow not “flow” out of a corner of the frame. 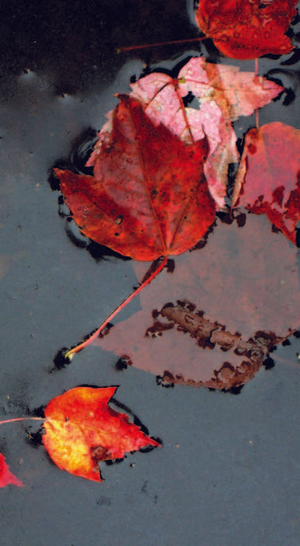 One of the nicest aspects of autumn is the crisp, clear weather, but for photography, wet is better. A dry, crunchy leaf about to fall from a branch or one that’s already on the ground looks lifeless in a photo, whereas a damp leaf appears perky and bright. Moisture enhances color, like wet paint on a wall. This photo of maple leaves floating on tannin-stained water is a favorite due to the dramatic contrast between the red leaves, which virtually glow from being wet, and the black background. The pattern of the leaves on the water leads the eye, bottom left to top right, too. 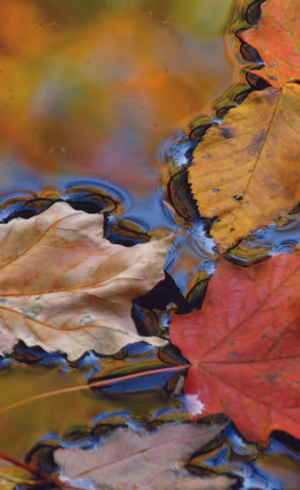 The pattern of the leaves on water in this shot also draws the eye bottom left to top right, and the leaves “flow” out the side, not the corner, of the image. The rule of thirds is present in the background with the reflection of the blue sky on just the right third of the frame. This is all good, but what makes this image an award-winner is the surface tension of the leaves on the water. You can feel it. Most people tend to shoot straight at (or down at) leaves. However, to capture surface tension, you need to shoot at a slight angle, which also adds depth to the photo. 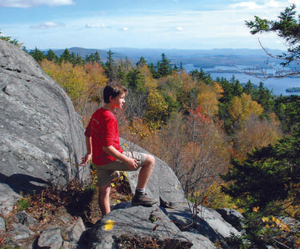 When shooting a photo of a friend or loved one during the fall, to apply the rule of thirds, avoid putting the person in the center of the frame. There are two other tricks for making compelling images of people with a fall background, rather than just another snapshot: 1. The person(s) should look into the frame, which draws the viewers eyes toward the scene and gives depth to the photo; and 2. the person(s) should look toward the view, not at the camera, but in a way that you can still see at least some of their face. 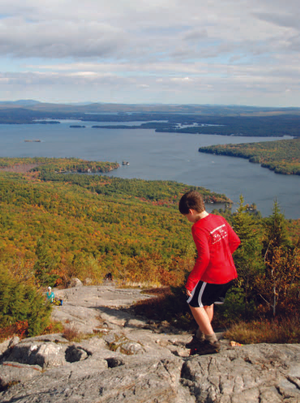 A big mistake that photographers often make is concentrating so much on the subject, in this case the boy hiking down the slab, that the horizon tilts. Horizons in fall panoramas should be level. Likewise, shorelines and boats on flat water should also be level.

Beyond the Maple Leaf 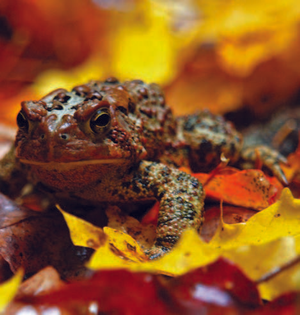 Not all attractive fall images need to be maple leaves. Wildlife against a colorful background or farm products harvested in the fall are just a couple of the many subjects that capture the hues of the season. Neither of these sample images is about leaves, but the dull-colored toad is on a bed of them, telling the viewer it’s autumn. The opposite effect happens in the pumpkin photo. The pumpkin, which is surrounded by drab, dead leaves, is the source of fall color. Can you see the rule of thirds in the photo of the toad and in the photo of the pumpkin? The toad’s eyes are across the top third of the frame. The pumpkin’s stem is on the left third. Lastly, if you take a photo of wildlife, be sure its eyes are in focus regardless of the season!

Bring Out the Color 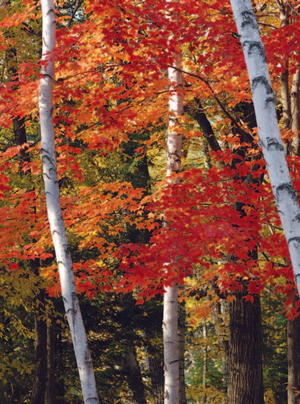 Note: Be careful using the contrast and color saturation functions in a photo processing program like Photoshop. They tend to overdo it. 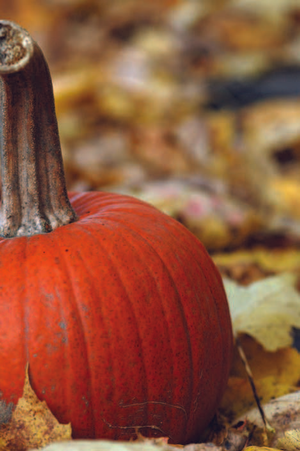 Sometimes an unlikely fall foliage shot catches the eye because it’s a little odd. Take this photo of a bug-eaten maple leaf. If you saw this leaf hanging from a tree on Smarts Mountain (where I took the shot), you might walk right by. However, the play of light on leaf, the hint of other leaves behind it on the dark background, and the holes somehow work. This photo, called Lacy Maple Leaf, is popular with galleries and won a national award. Of course, it has elements of a good fall image, including following the rule of thirds (the main stem and vein traverse the top third of the frame) and the use of natural contrast. But it’s also different, imperfect, which brings up perhaps the most important tip of all. Just get outside, shoot, and enjoy the spectacular
foliage! You never know what beautiful image might fall out of your camera.

Recognized year after year by the Outdoor

Writers Association of America as one of the top outdoor photographers in the United States, Lisa Ballard’s photographs have appeared in a multitude of publications, galleries, calendars, posters, greeting cards, automobiles, skis, brochures, advertisements, websites, books . . . and on the pages of image. To see more of her photos, go to LisaBallardOutdoors.com
Autum Eye Candy [5 Images] Click Any Image To Expand