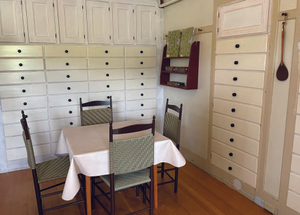 In the 1800s, Brothers of the Enfield Shaker Church Family, summoned by a tolling bell, assembled in this serene room several times a day. They came from their labors in men’s work—in the fields, forest, workshops, mill, and factory—gathering here before proceeding to meals or worship. In those tidy drawers, the Brothers found their laundry that the Sisters—considered equals, but who had different gender roles—had washed, folded, and delivered there for the men to later carry to their communal bedrooms. 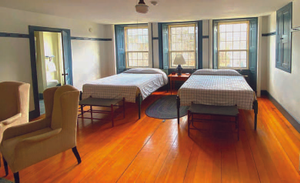 The Brethren’s Waiting Room, in the landmark 1841 Great Stone Dwelling, offers a perfect launching point for the Enfield Shaker Museum. Its simplicity and superb craftsmanship show off the lauded Shaker aesthetic. It also invites curiosity about the men and women who followed their faith and lived ordered, communal, celibate lives here.

A Glimpse into the Past
The Enfield Shaker Museum offers an introduction to the self-sufficient religious community who established their village and lived here from 1793 to 1923. This was a complex, multilayered place. Nearly 1,500 residents made the Enfield Shaker Village their home, for at least some time. Their community encompassed 3,000 acres with 100 buildings through its tenure. Community, faith, ideals, and enterprises are interwoven in its history and site.
“There’s a lot to learn about our society by looking at the Shakers. Everyone who came here brought something to the Shakers, and I think everybody who left here brought something of the Shakers out into the world,” says curator Michael O’Connor, who has been on the museum team since 1991, shortly after it was founded. 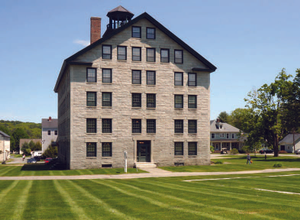 The museum centers on the Great Stone Dwelling, the spectacular six-story granite residence, built between 1837 and 1841 when the community was thriving. Eight other buildings in various stages of preservation are also part of the site. One of the earlier ones, the 1819 Brethren’s East Shop, currently houses the colorful Tempestry Project, a display of knitted banners documenting temperatures here between 1828 and 2022. The unrestored 1854 Cow Barn, Laundry and Dairy, 1880 Ministry House, and Brethren’s West Shop are all on the site, and outdoor features include Shaker herb gardens and a cemetery. The Stone Machine Shop and the Feast Ground on Mount Assurance are across Route 4A.

The museum offers guided tours with brilliantly informed interpreters, Shaker craft workshops, exhibitions drawn from the collections, special exhibitions, lecture series, and more. It hosts events including weddings and retreats and is open for overnight guests, with accommodations in 20 “Retiring Rooms.”
Building a Community 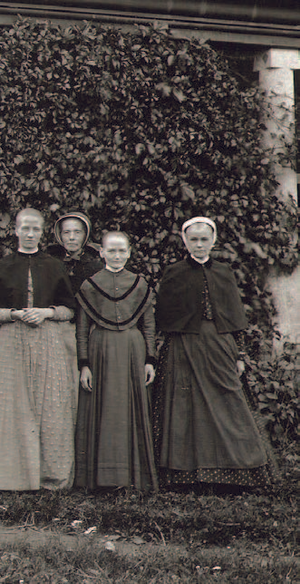 The Enfield Shaker Village, the ninth of 18 eventual Shaker villages, was founded in 1793, with an initial family of 22 Sisters and 18 Brothers. Their first building was the Meeting House, their place to worship. The first dwelling house and workshops followed. Shakers lived in family groups. Within a family, men and women were Brothers and Sisters. Children, sometimes arriving with biological parents, sometimes orphans, were raised by all. Men and women had different work and work realms but were seen as equal.

Farming was at the center of the early community, but the Shakers also showed their talent and thoroughness in building and in making furniture early on. While they were largely self-sufficient, they also always had some trade with the outside world, both in purchasing things they needed and selling their products.
In the 1830s, having outgrown their first dwelling, they embarked on a new, much larger one; in fact, the largest Shaker dwelling ever built. The Shakers prepared the site and did the extensive finish work, but they hired pros for its design and construction—architect Ammi Burnham Young, who also designed the second Vermont statehouse and buildings at Dartmouth.
The Shaker view of gender equality, their form following function appro-ach, meticulous craftsmanship, and innovation come together in this 30,000-square-foot, six-story granite dwelling. With two equal entrances, staircases, waiting rooms, and retiring chambers, men and women had their distinct spaces. They ate together in silence at separate tables in the dining room and worshipped together in separate rows in the meeting room.
Sharing the Shaker Story
Steeped in Shaker history and up to date on the latest archaeological research and scholarship, the museum’s Education Director Kyle Sandler, curator Michael O’Connor, and interpreters brilliantly bring visitors into the Shaker community who lived in this building, pointing out scores of features that a visitor might miss self-guided. Those custom-made interior shutters still swing perfectly in the 150-plus-year-old windows. Every room had its own woodstove. Ventilation hoods installed over lanterns kept smoke from fouling the air. Columns of built-in drawers provided clothing storage. A dumbwaiter helped move food from basement to kitchen.
In a particularly novel innovation, special cabinets in bed chambers, lined with zinc and ventilated to outdoors, provided storage for chamber pots, relieving residents of the need to dash to an outhouse while also sparing them the unpleasantness of the pot fulfilling its function.
Exhibitions highlight Shaker furniture. Enfield Shakers, for example, used a distinctive flame-shaped finial atop their ladder backed chairs.
The Meeting Room offers a sense of Shaker worship. Four chairs at the front accommodated the four elders—two men, two women. Brothers and Sisters sat separated in their rows, but danced together never touching, as dance and song were integral to worship. The dance floor even has small dots inset to indicate their positions.
A lovely gallery focused on women tells the story of Sister Rosetta Cummings. Cummings was brought to the Village when she was three years old in 1841, moved from Enfield in 1923, and died in the Canterbury Village at age 93. Examples of women’s work here include finely knit gloves, formal opera cloaks, and fancy poplarware pincushions and needle books, all sold to the outside world.
In the mid 1800s, times were changing with arrival of the railroad, telegraph, and expanding industrialization. The draw of Shaker life faded, and the village population, especially of men, declined. The population shrank and became increasingly female. Altogether, 1,498 people are documented as living in the Enfield Shaker Village, but only 370 are buried there. People were free to leave, and many did.
The Enfield Shakers left a legacy, including of innovation: Enfield Shakers are credited with the American design of the circular saw and the straight-edged broom. Their endeavors included the selling of seeds packed in envelopes, apparently the first.

“There has been a general trend in Shaker history . . . to generalize and say the Shakers did things in particular ways. The Shakers have very much been idealized,” says Kyle Sandler. Only recently, “there’s a push to look at individual Shaker experiences and records and take a more objective look. . . . There was an earlier attitude of angels floating around the village making beautiful stuff. The reality is much more nuanced,” he says. I

Who are and were the Shakers?
The mid 1700s, a period of Christian revivalism, saw widespread desire to revive Christianity from a period of moral decline. One group started in England the 1740s, that became the United Society of Believers in Christ’s Second Awakening, were derisively called Shaking Quakers, shortened to Shakers, for their gyrations during worship.
Ann Lee (b. 1736) joined this group in the 1750s. Her visions, particularly with regard to the Fall of Adam and Eve, led her to exhort followers to confess their sins, give up their belongings, and become celibate to find redemption. Christ’s second coming was expected by the sect to be a woman, and with Ann Lee’s visions, she was seen as that second coming. A further vision led her to immigrate to America in 1774, bringing eight followers with her.
The group settled near Albany, New York, Mother Ann preaching and bringing in converts. She died in 1784, but successors carried on, and soon the idea of communal villages took hold.
The Enfield Shaker Village—the ninth of 18 eventual villages—was founded in 1793 by Shaker missionaries who had come to this area in the 1780s and local people who felt called to join. Shaker leaders in Mount Lebanon, New York, encouraged these settlements, envisioning self-sufficient commun-ities where Shakers could live their beliefs.
“The essential principles of the Shaker faith, as it developed in America, include celibacy, equality of the sexes, community of goods, oral confession of sin (to Shaker Elders and Eldresses), pacifism, and withdrawal into their own communities from the “World” (their term for all nonbelievers). The Shakers accept that Mother Ann Lee’s revelations have led them into the Millennium foretold in the New Testament (Revelation 20: 1–6),” explains the Enfield Shaker Museum on its website.
Enfield Shaker Museum
447 NH Route 4A
Enfield, NH
(603) 632-4346
Thursday–Saturday, 10 am–5 pm
Until October 31
Enfield Shaker Museum [9 Images] Click Any Image To Expand