Take Me to the River - The Ottauquechee River Trail Offers Access to Exercise, Community, and is One of Woodstock’s Treasures A walk along the Ottauquechee River Trail offers colorful scenery, both in panoramic and small views.

Before you begin to walk the Ottauquechee River Trail, stop and sit at the bench overlooking the trail’s namesake, just a few yards from the beginning of your trek. Inhale the smells, which could include the freshness of the air, the lush riparian aroma, or cut hay. Gaze across the river for a unique view of Billings Farm & Museum. Listen to the water sing. Though you may hear cars on Route 4, the river will drown them out instead of the other way around. 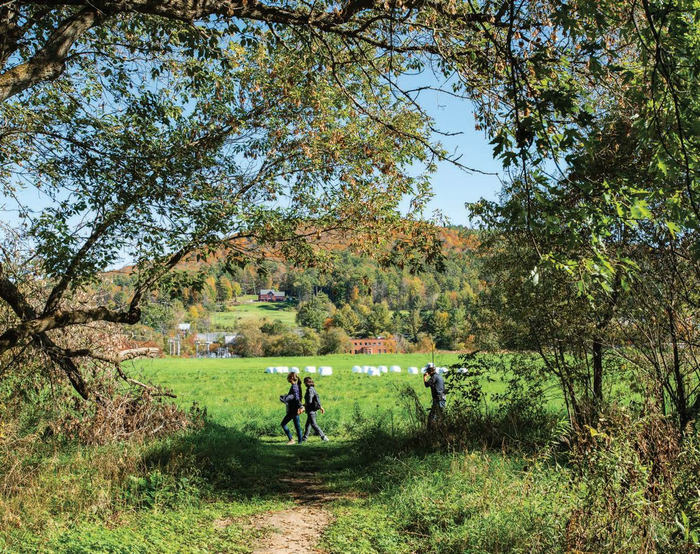 Now that you’ve already enjoyed so much in so little time, get up and get moving. There is much more to experience and appreciate on the nearly three-mile loop that offers more than a mile of river access and a microcosm of life and history in rural Vermont.

The Ottauquechee River Trail—or ORT as many refer to it—grants easy access to Woodstock’s third prominent geographic feature (the other two being Mount Tom and Mount Peg). Tom Weschler, who has been a driving force behind the ORT’s creation, notes that before the trail, the only access to the river running through Woodstock was at White Cottage, the Rec Center, and the Woodstock Farmers’ Market. Randy Richardson, development director for Upper Valley Trails Alliance and member of an informal committee that developed the trail, notes that “it is a relatively rare commodity in the Upper Valley: river access and a relatively flat, more accessible kind of trail.”

The idea of the Ottauquechee River Trail was not a stroke of inspiration from one person but came about by observation. Tom notes that people had been using the land as a means of exercise for themselves and their dogs long before the trail became what it is today.
Tom, Randy, and the committee of 15 saw the value of taking what had been informal and making it real. “The trail geeks,” as Tom calls them, “got together, and we were able to get permission from all the property owners to make the trail.”
On Labor Day 2020 the ORT opened, offering a gentle walking path for safe exercise, beautiful views, and 10 access points where people can gaze upon the river, kids and adults can swim, and fly-fishers can wade in the water. 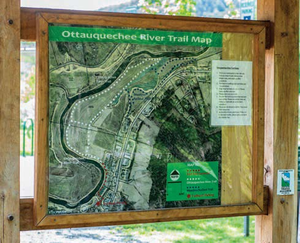 When the grass is chin high, walking the trail can almost seem like walking a maze. It can appear that the trail ends until you get closer and see that it’s made a sharp turn, and now you’re heading toward the river. But the grass isn’t always so high.

“The trail is located on the edge of the fields,” Tom says, “And the fields are actively farmed for hay, and the hay is used at Billings Farm.” The farm is owned by the Woodstock Resort Corporation, which also owns the Woodstock Inn & Resort. The Woodstock Inn & Resort, in turn, owns this land and has allowed the public use of this private property to create the Ottauquechee River Trail.
The generous usage agreement is only one part of the unique, cooperative story of the ORT. Marsh-Billings-Rockefeller National Historical Park also has a collaborative relationship with the trail. Rangers from the park conduct Woodland Workshops at the ORT using this ecosystem, which is different from that of the national park, to promote land conservation and a better understanding of the natural world.
In addition, members of the national park’s youth crew learned a lesson in milling wood, creating several sturdy benches from a large Norway spruce dating back to 1870 that fell in the park during a storm. These benches dot the ORT and invite folks to sit.
A Trail of Communities 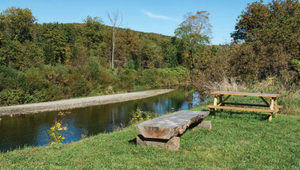 Tom likes to think of the ORT as a community trail, given how it draws people to it for various reasons, including its upkeep. “We have what we call our volunteer Saturdays,” Tom says. “There must be a dozen people who come down and do maintenance work.”

If you went to the trail on a Saturday and saw these volunteers, you could join that community. Or, if you went on a Monday morning, you might spot another community, a group of senior citizens walking the ORT. These walkers are taking advantage of the flat, easy-to-walk trail through an initiative run by Community Care Coordinator Carla Kamel.
For Anne Richardson, these walks are an opportunity to meet and talk to other seniors in the region who are also using the trail for exercise and camaraderie. Anne enjoys walking far and then working her way back to the beginning, and she is grateful to have such a place to take a safe, long walk.
For those who choose not to walk far or want something different out of their Monday morning routine, Anne thinks the benches by the river do the trick. “It’s so pretty to sit there and be in Mother Nature. And even though you are still in the village of Woodstock, you are outdoors.”
About halfway through the trek, the trail turns and heads into the meadow. Well-marked signage leads you to boardwalks over a marsh ecosystem. A little further along, the route enters the woods, and the path goes from grass to dirt. It’s a striking transition that allows you to experience a bit of Woodstock history. The trail is the railbed of the train that ran between White River Junction and Woodstock until the 1930s. As you walk, you’ll pass a crumbling red barn, an odd site on the edge of the woods. Like the former railbed, it is a reminder of the land’s past use and how it continues to serve the needs, different as they are now, of the people of Woodstock. 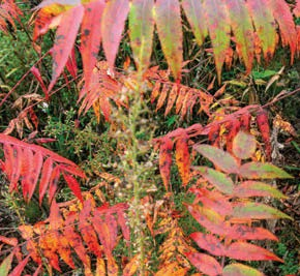 If a walk through the woods is not your thing, or you prefer a shorter trek, you can stop anywhere along the river trail and turn around and walk back. When you do, you will be treated to a view found nowhere else in town. In this lowland, Mount Tom rises before you, distant and seemingly taller than it appears from the village. From this vantage point in the fall, the Ottauquechee River Trail may be the best foliage-viewing spot in all of Woodstock.

In the winter, the river goes from sluggish to frozen, and snow covers the fields. The trail, however, is not dormant. Go down to the ORT after a fresh snowfall, and you’re likely to find cross-country skiers or snowshoers making trails alongside the one cut into the grass during the warmer months. You could say that the ORT is a four-season path, which is true. During Vermont’s tumultuous fifth season, when the river hurls ice floes onto the land and the usually firm field turns to quicksand-like mush, the trail is less inviting. In those early spring days, the Ottauquechee River Trail spends time alone, waiting, like humans, for the return of warmer weather and the river to beckon.