Water-powered mills popped up along Vermont waterways like spring dandelions in the early 1800s. Falling water at cascades on streams and rivers provided power to propel saw blades, turn grinding wheels, and more. Hardworking Vermonters seized the opportunities of this accessible power and brought the industrial era to the Green Mountains. Innovation and ingenuity took off.
In Windsor, a particularly ingenious pair—a mechanic and a gun maker—teamed up on an ambitious undertaking. Competition for a government contract propelled them to use their expertise to devise a new approach. Their innovation advanced a new era of precision manu-facturing known as the “American System of Manufacturing.” 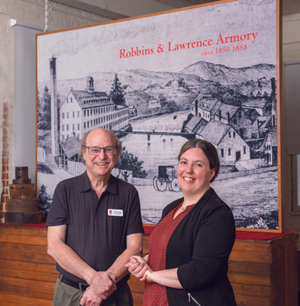 The American Precision Museum in the 1846 Robbins and Lawrence Armory in Windsor celebrates machinists and toolmakers of this area and their prominent role in shaping American manufacturing, and shows how advancements in machining drove industrialization. The museum’s unparalleled collection of historic machines—lathes, grinders, shapers, stamping presses, and more—tell the story of ever-increasing productivity and precision. Manufacturing comes to life in the museum’s Innovation Station, where machines do their work with demonstrations—historic cutters and lathes producing metal gears and complex shapes to modern 3D printers making vases and tools. Along with honoring the past, the museum inspires new generations with the dynamic present and future of manufacturing.

From Handmade to Standardized
“This is the birthplace of the ‘American System of Manufacturing.’
In the 1840s and earlier, products were mostly made by hand, so each individual item was unique, just like if a painter paints the same picture twice, there are subtle differences. What happened here is that we went from that process of making things by hand to making them by machine,” says Steve Dalessio, the museum’s executive director. 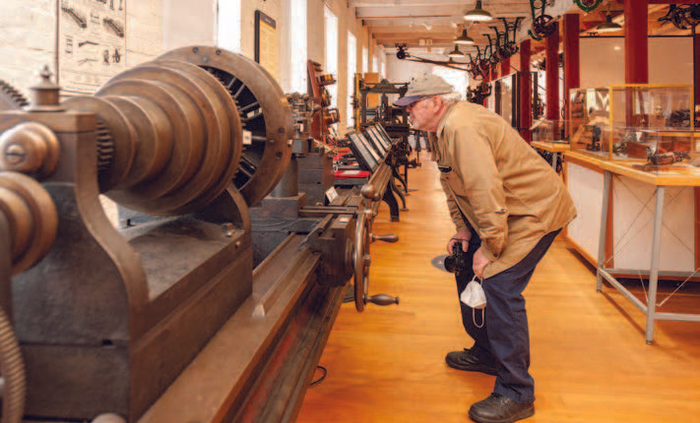 “With the ‘American System of Manufacturing,’ that this whole idea of interchangeable and repeatable manufacturing kept growing and growing until you see what you get in today’s manufacturing, which is all about precision manufacturing.”
The museum’s story starts with mechanic Richard Lawrence and Windsor gun maker Nicanor Kendall, who teamed up in the late 1830s. In the 1840s, the US government encouraged innovation in manufacturing with a competition for a contract for 10,000 rifles. These rifles, though, had to have standardized, interchangeable parts. Every lock plate, stock, barrel, and other element had to be exactly the same. Making these identical parts required machine tools that would do the exact same thing over and over again. Robbins and Kendall had their own considerable skills and were also forward thinking in bringing in other talented machinists and designers to create machines to do this work.
Joined by businessman Samuel Robbins, they built the handsome brick armory in Windsor alongside Mill Brook, which would provide the power to run their new and adapted machines. Bringing in machinists and workers, they perfected techniques to produce interchangeable parts, building a thriving manufacturing business. They also leapt into the business of making and selling the machines. 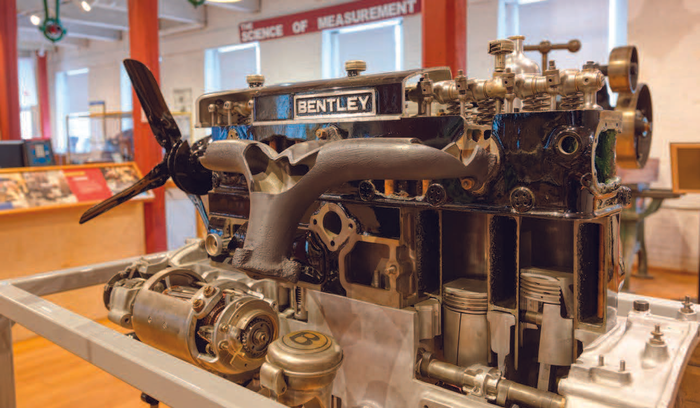 Bentley-Rolls Royce engine, 1930s, with cutaways. Visitors can crank the engine to see it move.

Their success went international when they were invited to show at the Great Exhibition of the Works of Industry of All Nations at the Crystal Palace in London in 1851. This approach of mechanization, with machines designed specifically for each operation to produce identical interchangeable parts, became known as the “American System of Manufacturing.” British arms manufacturers ordered their machines, beginning their business abroad.
Celebrating the Joy of Making

One of the museum’s first displays takes visitors back to the days of waterpower. In front of a clear diagram showing a waterwheel is a small metal wheel with a handle. Grab that handle and start the wheel turning. Suddenly that simple movement turns attached belts, which then reach up to the ceiling, turning a long metal shaft there. In the Robbins and Lawrence Armory, waterpower from adjacent Mill Brook drove those shafts and multiple belts that ran from them to power these machines that would then, cut, drill, press, and stamp metal. 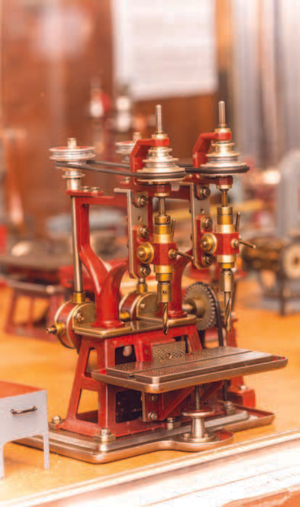 For visitors who know or are curious about machine tools, the museum is a candy store of treats. The very first Bridgeport Milling Machine, serial number 1, made in 1938 is here. An 1861 Turret Lathe from Lamson, Goodnow & Company in Windsor, is believed to be the oldest example of this type of machine that allowed the machinist to rotate different cutting tools into position for different types of cuts. The 1918 Centerless Grinder designed by Lewis R. Heim increased precision in ball bearings and roller-bearing rolls to a quarter of a thousandth of an inch (0.00025) tolerance—vital in automobile production.

Along with its rich historic collection, the museum looks at the present and future of manufacturing with exhibits on recent and contemporary innovation.
“Our mission here is to inspire a new generation of innovators, inventors, engineers, and manufacturing people to the joy of making. There are great opportunities in manufacturing today,” says Steve.
American Precision Museum
196 Main Street
Windsor, VT
(802) 674-5781
americanprecision.org
American Precision Museum [20 Images] Click Any Image To Expand Bentley-Rolls Royce engine, 1930s, with cutaways. Visitors can crank the engine to see it move.