Looking at Chris Mazzarella’s art, you might be puzzled. The image might be of a cow or a barn—not uncommon subject matter for art inspired by Vermont—but is it a painting? Is it a photograph? Where is the field the cow was grazing on? How can that barn, which had undoubtedly seen many Vermont winters, look so perfect?
Some people may not know how to appreciate Chris’s works at first sight, which is fine with the 40-year-old Vermont artist currently residing in the Upper Valley. Whether you are confused or not, once you see Chris’s work, you will never be in doubt as to who made it. No other artist in the area is offering these conventional subjects in such unconventional ways.
Transforming the Artist 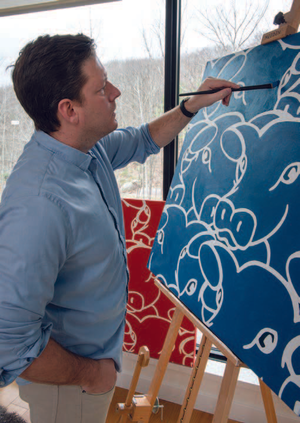 Chris adds another layer of oil to one of his new Pasture paintings.

Like turning photographs into his unique style is transformative, so were the years Chris spent building his skills, talents, and interest. Chris went to college for a couple of years, taking a few art classes, but he was thinking beyond his studies. “My interest then,” Chris admits, “was furniture making. My dad is a builder, so I grew up with woodworking.” What he wished to do was design artistic, functional pieces and sell them. What he learned was that his hopes as an artist and reality were a bit at odds.

A better means of making a living was to design kitchens, which he did through most of his twenties. He then worked for an architect in Norwich handling the digital aspect of the job, including computer-aided design and managing the website. The site needed pictures. He started taking them. Suddenly, photography became a passion.
Turning to the outdoors, Chris began photographing wildlife. He started a blog and had more than 3,500 subscribers. “I thought this was my future,” he says, “so I spent every weekend on the Canadian border on a kayak photographing moose.” As much as he enjoyed this work, he soon discovered a problem. “If you get a cover photo of a moose for a magazine, you get like $500,” he says, but the lens used to take that shot cost $10,000. Again, his hopes and reality clashed. He used his talent to produce images for advertising. But he still kept snapping photos.
Transforming the Art
To acknowledge his decade as a professional photographer, Chris put together what he called his 10th Anniversary series. He sifted through the collection of photos he had taken between 2010 and 2020 and chose 75. He then leaned on his home, furniture, and interior design skills amassed over the years and struck upon an idea that would help define his vision as an artist. 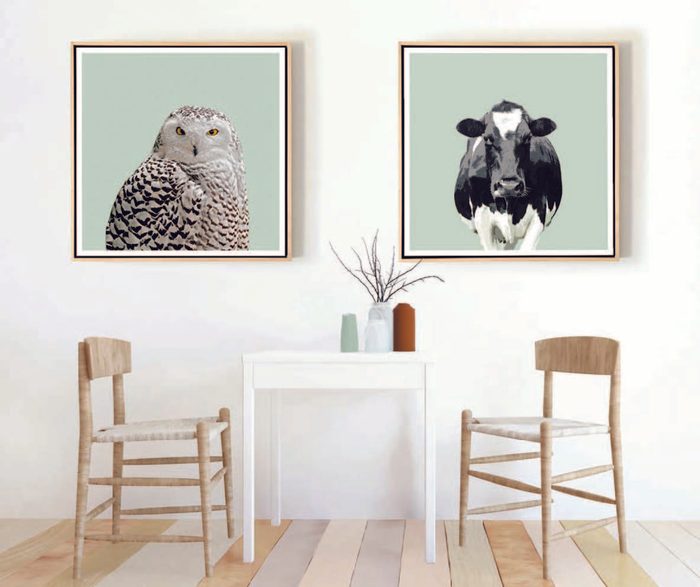 Framed prints Zo and Chloe, both 30x30”, hang together. Chris offers his prints with custom-colored backgrounds to match his clients’ decor.

When people redesign their homes, they hold paint swatches up to the wall. He wondered, what if the swatch was the art? “I kind of reverse-engineered that,” he says. “Now all I have to do is put an image on that swatch, and that’s my style.”
Using specific computer programs, Chris strips out the background of his photo. He reworks what is left by breaking down the image into different layers of color and adjusting their opacity. Recombining them, they become posterized. In other words, the change from light brown to dark brown of a cow’s hair becomes more severe. As a result, the image loses some of its depth and detail.
The process for his architectural works is a bit different. “When you take a photo like this,” Chris says about an image of a barn, “no matter how good your lens is, it’s going to be distorted in some way. So I draw in lines and I flatten everything. All these windows are square and all these lines are perfectly perpendicular and plum or level. I try to make them look more like an architectural elevation plan where the sides are square and you don’t see a third dimension.”
All this takes patience. Chris may spend eight hours on the computer to get the image to where he wants it. He prints the image and tinkers with it for another week or so before he deems it ready to print on heavy cotton paper. For the prints in his Colorblock series, he produces a limited run of 50 per size.
Going to Pasture 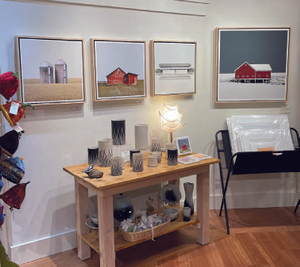 Satisfied with the results of his Colorblock series, Chris turned to oil paints to develop a second signature look, his Pasture series, which draws on the work of postmodernist painter Hunt Slonem. Where the Colorblock prints feel open, these paintings, with their minimalist depiction of a single cow repeated anywhere from a few to 99 times, feel tight. The images overlap and make focusing on one part of the painting difficult. Will your eye catch the cow’s eye or its nose or ear? Once you’ve focused, will you see that part of the cow, the whole cow, or all the cows? And will you see the same thing the second time you look?

While you are looking at the cows, what story will you see? Are they huddled together wanting to be close, or are they the victims of poor farming practice? “I love that you don’t know which emotion they are supposed to poke,” says Chris.
Finding a Place in the  Canon of Vermont Art 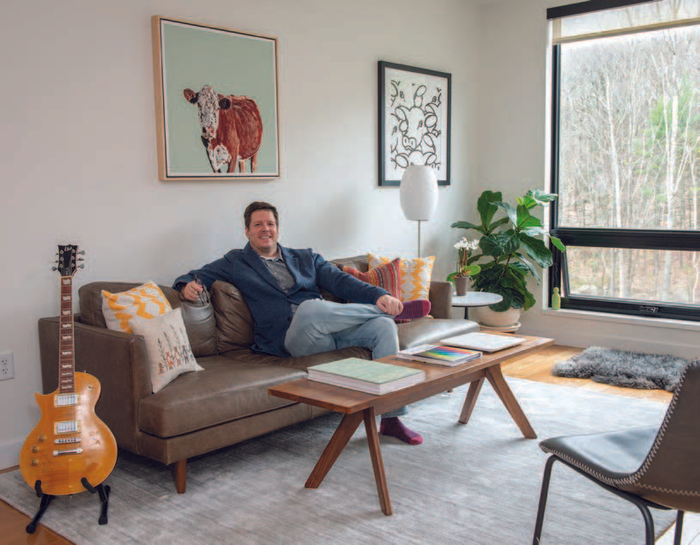 Chris lounges on the couch for that brief moment before his boys come home and reconstruct it into a fort.

Vermont is often perceived as a rural, traditional place, a place trapped in a simpler time. Much of the art inspired by Vermont captures and perhaps promulgates that narrative. Chris’s work shows you can take those images, motifs, and values and make them something new, something modern. He knows that not everyone may take to his art. But people from around the country and the world who want a part of Vermont in their home may find that more traditional art doesn’t fit their design. “But I think you can bring a cow to California,” Chris says, “if you stylize it correctly.” Framed prints Zo and Chloe, both 30x30”, hang together. Chris offers his prints with custom-colored backgrounds to match his clients’ decor. Chris adds another layer of oil to one of his new Pasture paintings. Chris lounges on the couch for that brief moment before his boys come home and reconstruct it into a fort.