France The Slow Way - Relax on a Barge Cruise Slow travel, a term first popularized some 20 years ago, has come into its own of late, influenced by our reaction to a worldwide pandemic and rising concerns about the health of the planet.

The phenomenon takes its name from the slow-food movement that began in Italy in the 1980s, spreading throughout Europe and to America. Instead of eating sur le pouce, as we say in France (literally “on the thumb,” or on the go), the slow-food movement taught us to appreciate every aspect of cuisine, starting with the way our food is produced.

In the same way, slow travel invites us to relish every moment of a travel experience. It combines the art of taking your time with an appreciation and respect for the wonders of a place and its people, and it aims to benefit not only the traveler but also the artisans, farmers, vintners, restaurateurs, and other folks with whom the traveler interacts. 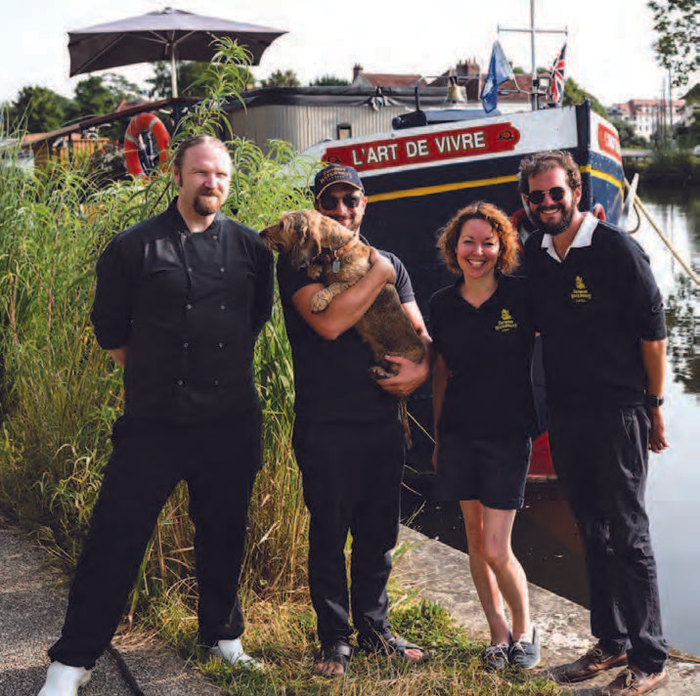 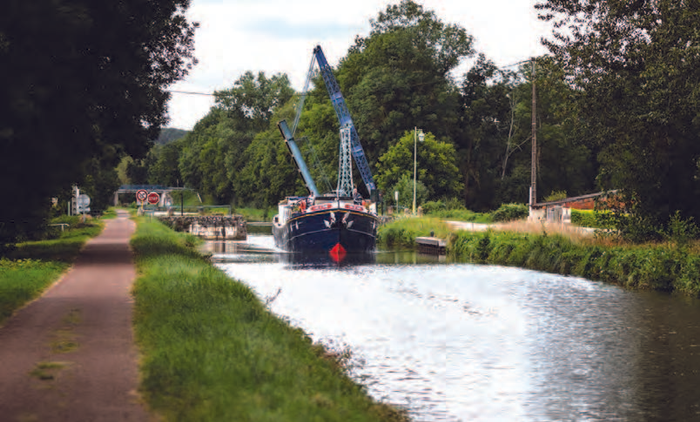 France, not surprisingly, has become a beacon of slow tourism, and not only for its gastronomy. Among the country’s lesser-known attractions is an 8,000-kilometer network of navigable waterways that makes for a unique experience. The system includes the canals of Brittany as well as the Seine, the Garonne, the Canal du Midi, and the Rhône, among other waterways, and it plays host to thousands of travelers per year. The vessels are former cargo barges retrofitted to serve as floating hotels. They cruise along the canals at five to eight kilometers per hour—walking pace—and along the rivers at 10 to 12 kilometers per hour. It is the ideal pace at which to take in the countryside, the birds, the chateaus, and the small villages on either side of the canal. What’s more, most of the barges are furnished with bicycles because the former towpaths are now bicycle routes. When you come to a set of locks, you can hop off the barge, pedal or walk alongside the canal, and return to the boat at the next set of locks. 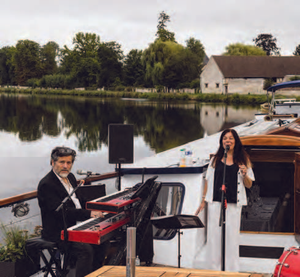 As a young couple ever in search of new travel experiences, we were eager to give barge cruising a try. Although we were born in France and travel often for both work and pleasure, a barge cruise promised a view of our native country such as we had never seen before. More important, as part of the “slow” movement, barge cruising reflects a certain mindset—one that has become essential to our decision-making—inviting us to enjoy a simpler, more sustainable way of life.

Taking in the Sights
Our weeklong trip, arranged by Barge Lady Cruises, was aboard l’Art de Vivre, operated by European Waterways. The barge was constructed in England during the first World War as a supply boat for Allied troops fighting in the Somme. Today, she pursues a quieter life on one of the oldest canals in France, the Nivernais Canal in Burgundy. 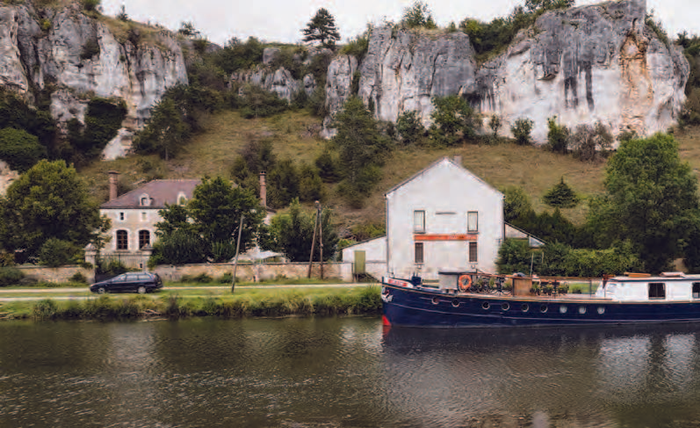 Les Rochers du Saussois, a series of limestone cliffs on the River Yonne.

Embarking near Auxerre, we began a voyage both slow-paced and rhythmical, a continual ballet of discoveries—cultural, culinary, and oenological. Dining was a veritable symphony of flavors representative of the local terroir, each meal completely different from the last; never before had we encountered such a diversity of wines, dishes, and cheeses. Our days were relaxed but never monotonous as we alternated between lolling in the Jacuzzi, cycling along the towpath, and exploring the Burgundy countryside with a knowledgeable guide. Our tours included a private visit to Domaine Laroche in Chablis followed by a wine tasting and lunch prepared by a chef for the estate; a tour of the Underground Quarry of Aubigny, origin of the limestone used in the Paris Opera; and a subterranean tour and tasting at the Caves Bailly-Lapierre, celebrated for its Crémant de Bourgogne. Architectural splendors included the Château de Bazoches, the pilgrimage site of Vézelay, and the medieval city of Auxerre, capital of Lower Burgundy, with its cobblestone streets and magnificent cathedral in the historic center. 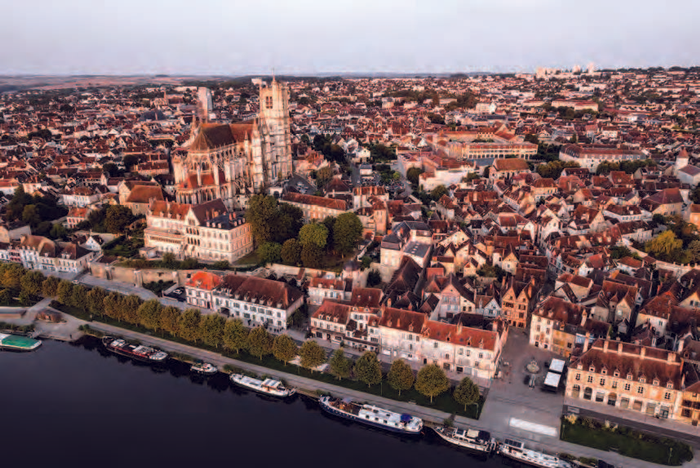 Our weeklong voyage, like the barge itself, perfectly represented the idea behind l’art de vivre à la française: a tranquil appreciation of natural and cultural wonders combined with relaxation and epicurean pleasures. I

What to Know Before Booking 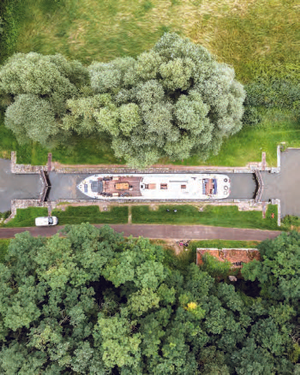 Passing through a set of locks, a maneuver that requires skillful navigation.

A barge is a flat-bottomed boat designed to navigate canals. Many of today’s luxury barges were built to carry cargo and retrofitted to serve as floating hotels after the railroad made the canal system obsolete. Because they must pass through a system of locks, they are much smaller than your typical a river boat. Most carry between eight and twelve passengers. Because it is possible to rent the entire boat and customize your shore excursions, barging is especially popular with families and groups of friends. 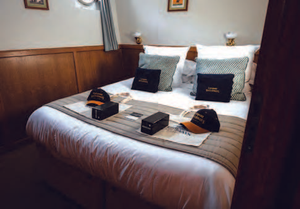 Most barges have four to six cabins—compact but comfortable—and accommodate up to 12 passengers.

There are only 75 hotel barges in the world, and most of them are in France, which maintains an extensive canal system lined with castles, vineyards, and sheep meadows. You can hop off the boat at a set of locks and stroll into the village to buy a croissant, then get back on the boat at the next set of locks (barges typically travel at walking pace). Scotland and England are also popular destinations; in fact, luxury barging was invented by an Englishman back in the 1970s.

Prices start at around $4,500 per person for a six-day cruise.

As of October 15, 2021, Barge Lady Cruises requires all guests over age 12 to be fully vaccinated before boarding its barges in 2022 and 2023. Since the current situation is constantly evolving, contact Barge Lady Cruises for safety guidelines and procedures before you schedule your cruise.

Our tour was arranged by a Chicago agency. Barge Lady Cruises dates back to the 1980s, when barge cruising was in its infancy, making it one of the top authorities in the field. Owner Ellen  Sack, her two daughters, and their  staff arrange cruises throughout France and in seven other European countries.