State officials add fish to the tank at the dedication

The Roxbury Fish Hatchery sits along Route 12A about 20 miles south of Vermont’s capital city Montpelier, near the headwaters of the White River’s Third Branch. For those of us who grew up along that river’s chilly waters, the hatchery has always been a familiar presence, something like an old friend—not flashy but reliable and reassuring.

The scene of many a school field trip, destination of many a bike excursion (with stopovers at the spectacular swimming holes along 12A), we believed that the fish hatchery was ours. During the warm months when the hatchery was in operation, our families would picnic beside the hatchery holding ponds, teeming with immature fish called fry. We kids would pester the staff with questions about the mythic two-headed trout that was said to lurk in the depths of the hatchery’s ponds. We would insert pennies (later nickels) into the gumball machine that had been modified to dispense fish-food pellets and watch the fry leap and splash as we flung the food into the water. Our sentimental attachment to the hatchery has always run deep. 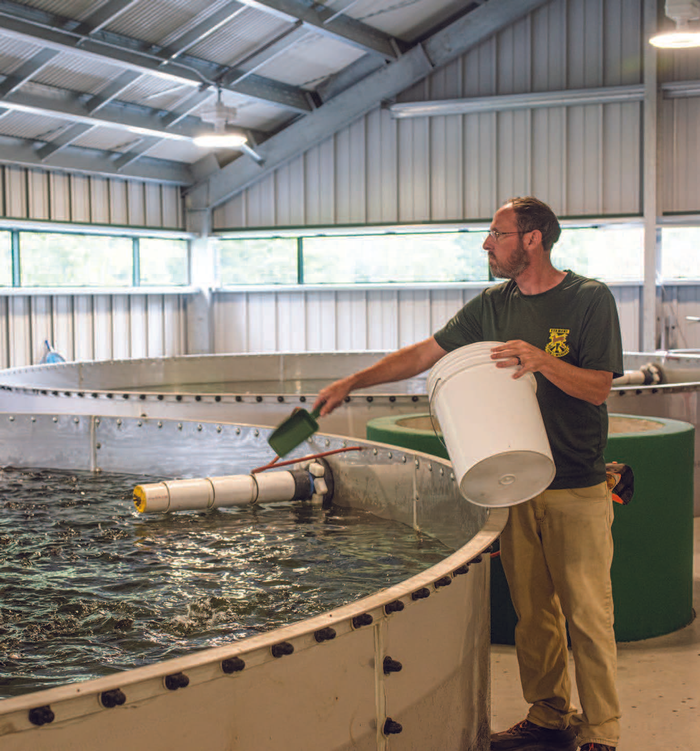 Manager and Fish Culture Specialist Jeremy Whalen feeds the trout in one of the new buildings.

Thus it was with great sadness that we heard the news, now more than 10 years ago, that the hatchery had been scraped off the face of the earth by the furious floodwaters of Tropical Storm Irene. While a few buildings remained in the hurricane’s wake, most of the holding ponds were obliterated, all the fish scattered or dead. The extent of the devastation made it seem unlikely that the antique hatchery would ever be rebuilt.

Everyone loves a comeback story, even if it takes 10 years. So when I heard that a formal reopening ceremony was being planned at the hatchery for August 21, 2021, just a week shy of the hurricane’s 10-year anniversary, I was determined to be there. This was certainly the last of the major projects to rebuild infrastructure destroyed by the storm. While the ceremony didn’t attract any of the heavy hitters of Vermont politics, a small group of Montpelier bureaucrats, aides to Vermont’s congressional delegation, and a few curious locals showed up to tour the reincarnated hatchery on a perfect Vermont late-summer’s day.

There was no way that any environmental agency would allow the rebuilding of the Roxbury Fish Hatchery to the way it had been before Irene. It had been a primitive operation that did little to mitigate its impact on the water quality of the Third Branch or to ensure that the fish were raised in hygienic conditions. Hatchery science has progressed since the late 19th century, and fish today are raised in carefully controlled conditions using water that is filtered and treated repeatedly and is essentially drinkable by the time it is returned to natural waterways. 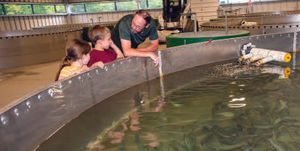 The new hatchery has been completely redesigned, but it incorporates at least one aspect of the historical operation: the entire process is gravity-fed. From a spring at the northern edge of the hatchery property, the water passes through a thorough filtering and ultraviolet sterilizing process before it enters the first of three new buildings built to the south of where the holding ponds used to be. These buildings house a series of large, round concrete tanks where the fish live out the first 18 months of their lives before they reach the proper size for stocking (8 to 10 inches). The water in the tanks is in constant motion, allowing waste and other byproducts to be collected in the center and removed via pipes built into the floor (it is later turned into fertilizer). The living conditions are much better for the fish, reducing such anomalies as the legendary two-headed fish and other genetic mutations. The fish can be stocked at a much larger size, since they survive longer in the new, more healthful conditions, and the hatchery can operate year-round. 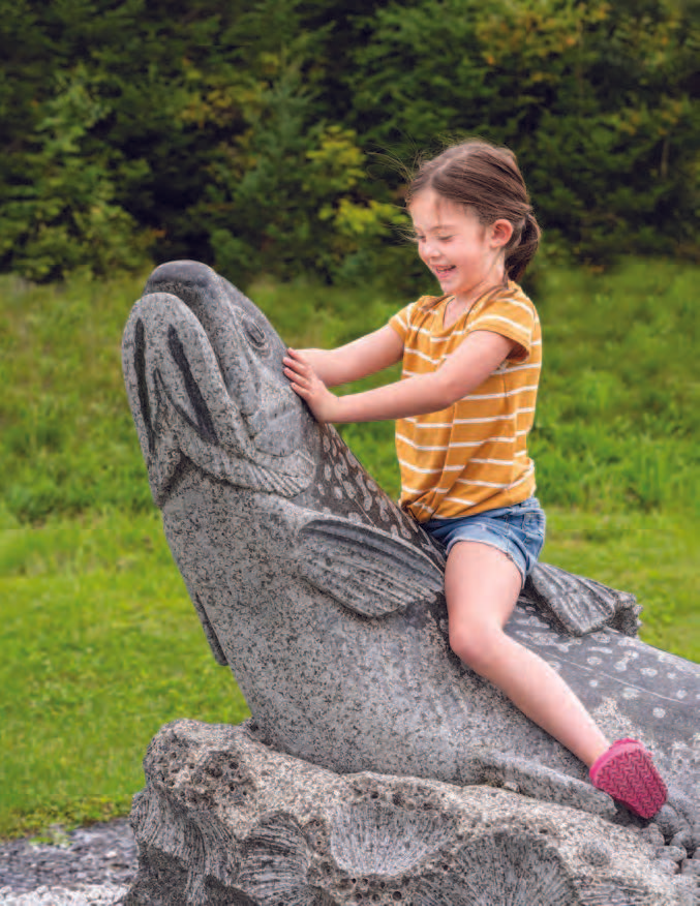 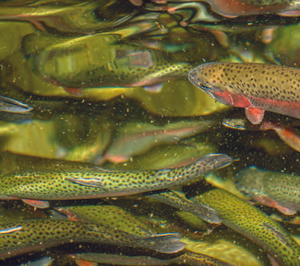 Keeping watch over the proceedings during the reopening ceremony, beaming like a proud father, was Jeremy Whalen, superintendent of the hatchery, a wiry man in his early forties with the permanently sun-burned look of someone who has spent most of his life outside. He remembers back on that afternoon in late August 2011, when, recently promoted to his job, he was working his usual Sunday shift at the facility. Hurricane Irene, after causing major damage in North Carolina, had made its second landfall that morning in New Jersey, near Atlantic City. The forecasts were calling for heavy rain in Vermont, but the consensus was that the storm had done its worst and was likely to wind itself down with little additional impact. Jeremy returned home, relatively certain that the hatchery would withstand the storm’s ire.

All the same, he spent a restless night. Unable to sleep, he, like many Vermonters, listened obsessively to Waterbury radio station WDEV’s nonstop Irene coverage, shocked by the unfolding catastrophe. As the scale of the flooding and destruction became clear, Jeremy determined to return to the hatchery, and at about 4:30 he packed up his truck with emergency supplies and headed to Roxbury, little knowing that the 40-minute drive would take him more than seven hours due to road closings and other storm damage.

Jeremy’s only commentary on discovering the devastation at the hatchery was, “It was hard.” Four out of the five ponds that had made up the old hatchery were nowhere to be seen, erased by the force of the floodwaters. While the vast majority of the fish at the site had been washed away, there were still several thousand fish flapping around desperately in various puddles and shallow pools around the site, slowly suffocating. The historic buildings, built between 1891 and 1897, were still standing because their doors had been torn away, allowing the floodwaters to flow through unhindered, but the rest of the hatchery lay in ruins. Joined by his old mentor, former superintendent Ralph Barber, Jeremy prepared to begin the laborious process of cleaning away the debris by hand.

The Haul of a Lifetime

First up: what to do with the remaining fish? There was no way to save any of them nor any place to put them even if he managed somehow to gather them together. Jeremy ran into a group of local kids hanging out at the general store down the road and invited them to bring their fishing rods to the hatchery. They might as well practice their casting skills while helping to round up the doomed fish.
It was a better idea than he realized. Before long, a good chunk of Roxbury’s population—youth as well as adults—was at the hatchery, fishing rods in hand, pulling in the haul of a lifetime. As Ralph and Jeremy returned to the task of clearing away the mess, route 12A became the site of an impromptu community dinner, with dozens of home barbecues set up on the pavement ready to broil the newly caught rainbows and brookies. It was a fish fry for the ages.
Today, the historic grounds at the northern end of the hatchery have been restored. The original buildings have been spiffed up, the electric lines have all been buried, and two of the five ponds built by the Civilian Conservation Corps in the 1930s have been recreated. A granite sculpture, The Origin of the River by Barre artist Sean Williams, was inaugurated at the August 21 ceremony and stands sturdy enough for kids to play on. Although this part of the property is no longer used to raise fish, it is maintained as a park, almost a museum, ready to welcome new generations of visitors. Fish swim again in the ponds (purely for show) and even the old fish food vending machine, beloved of generations of visiting children,  is back in place, now completely free. The old hatchery has come back to life. 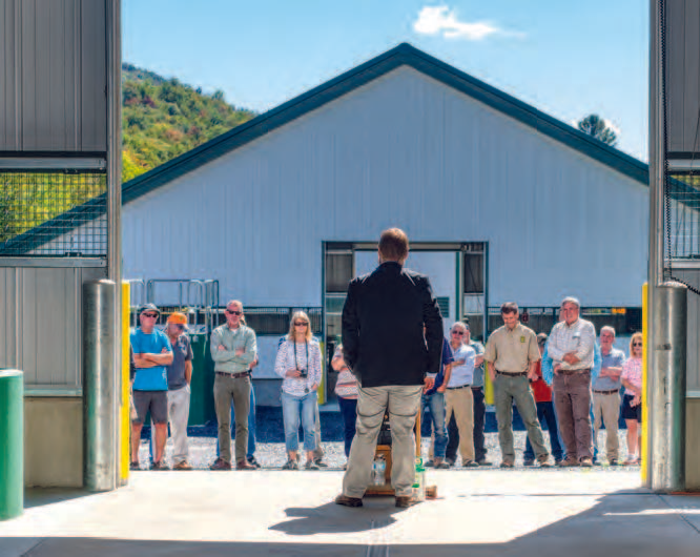 People gather for the dedication ceremony. State officials add fish to the tank at the dedication