A Store to Explore in Downtown Hanover Vintage and variety are the hallmarks of the collection at rpmNH.

It’s a quiet weekday afternoon on Main Street in Hanover, with just a few shoppers hurrying down the sidewalk, bundled up against the breeze. However, at the rpmNH (Records, Posters, and Memorabilia) shop, things are getting busy. Funky music plays over the speakers, and a couple appearing to be of ’60s vintage enters the store and starts leafing through the record bins. Soon, a group of teenaged boys saunters in and heads straight for the large poster racks. A few more customers enter and start perusing the shelves of CDs, DVDs, and video and audiocassettes. A woman in her 20s arrives and checks out quickly with a laminated 11-by-17-inch copy of modern artwork, saying it is a gift for a friend. 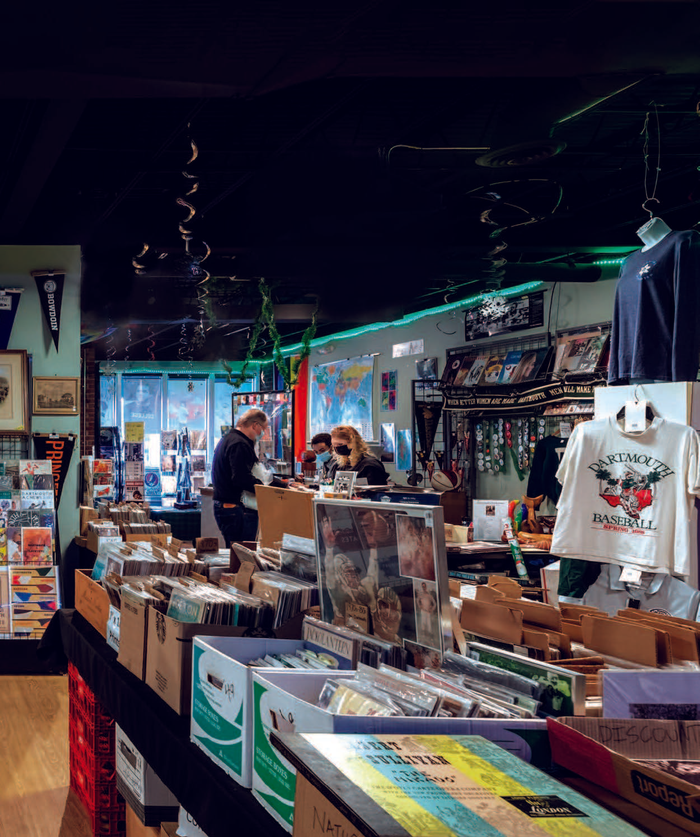 Store owner Bryan Smith asks the record shoppers if they need any help. A customer, who sports an impressive white beard, calls out, “This is the complete ‘Alice’s Restaurant!’ You don’t usually see this!”

When the customer comes to the register with two records for his wife, Bryan puts them in cornstarch bags, which he points out are biodegradable. Bryan then gives the customer a receipt to hold on to—just in case. “I’ve been doing this for 18 years, and I rarely get a return,” Bryan says. “I stand by and guarantee all of my products.”
“I looked at Alice, and she looks good!” the customer says with a grin. The find has made his day.

A Variety of Treasures

Two of the teenaged boys each purchase a couple of larger 24-by-36-inch posters, and Bryan advises them on how to hang them. “Put a piece of tape on the back side of the poster and then put the thumbtack through the paper and the tape to avoid tearing.” He also points out the Command strips he carries to hang posters because Dartmouth students can’t use tacks. The boys thank him politely for the advice and hustle out with their poster tubes. 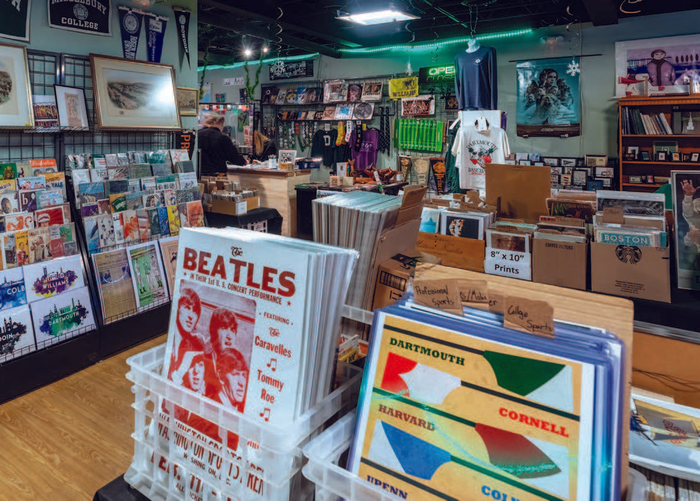 The store displays a large collection of posters, including many from colleges throughout the region.

Another of the teenaged boys stops and asks about heavy metal records and mentions a couple of albums by Van Halen and Pink Floyd that Bryan says are in high demand. “Titles like that come in and out of the store within hours—not days.” Bryan explains that to find coveted artists, including Led Zeppelin or Fleetwood Mac, you have to follow the store’s Instagram page, which he regularly updates with lists of newly acquired titles. Bryan never knows, for example, when locals who are downsizing will come in to rehome their record collections. The teen says he will definitely follow the page.

Bryan explains to the next customer, a gray-haired man who buys a CD, that he has a special machine to resurface his CDs and DVDs. He tells the customer that the store gets new inventory all the time, and the man tilts his head back and laughs, saying that he’s coming back when he has at least a few hours.

Not Your Average Posters 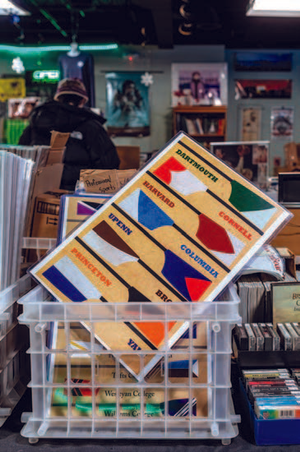 One of the many popular posters at rpmNH.

It’s difficult to list the variety of products that rpmNH carries; it’s a shop one needs time to explore. Obviously it features a huge selection of vinyl records, and all sizes of posters and fabric wall hangings. Some customers will display the largest movie posters in light boxes, like one would see at a cinema, as a decoration for their home movie rooms. Bryan says he spends hours finding posters that are not typically found in chain stores. “But I also try to have posters that a mother with an eight-year-old could walk through the store and feel comfortable with.” He refuses to carry images that objectify women.

He notes that his bestselling posters are the laminated 11-by-17 size because “they fit in carry-on luggage.” One favorite with a photo of teens trying to look cool reads “TEENAGERS: Tired of Being Harassed by Your Stupid Parents? ACT NOW! Move out . . . Get a job . . . Pay your own bills. Do it while you still know everything.”

Some of the 11-by-17-inch laminated posters in the store are designed by local teenaged and college-aged artists including Audrey Lee, Allegra Harvard, Neve Monroe-Anderson, and Natiqua Smith. Bryan notes that “many of the people who are drawn to the store have a tendency to be artistic.”
Customers can also find pins, stickers (the anime ones are popular as laptop decorations), and postcards at rpmNH. Those interested in Dartmouth memorabilia come for the vintage shirts and jackets and sports paraphernalia, such as football programs, set out reverently in mini displays. A few items from other Ivy League schools are also for sale. Bryan is proud that he carries the largest selection of Dartmouth Winter Carnival posters—more than 60 years’ worth. The store gets into the Winter Carnival spirit each year, selling life-sized cardboard cutouts of celebrities related to that year’s theme. This year the store features legendary movie spies. 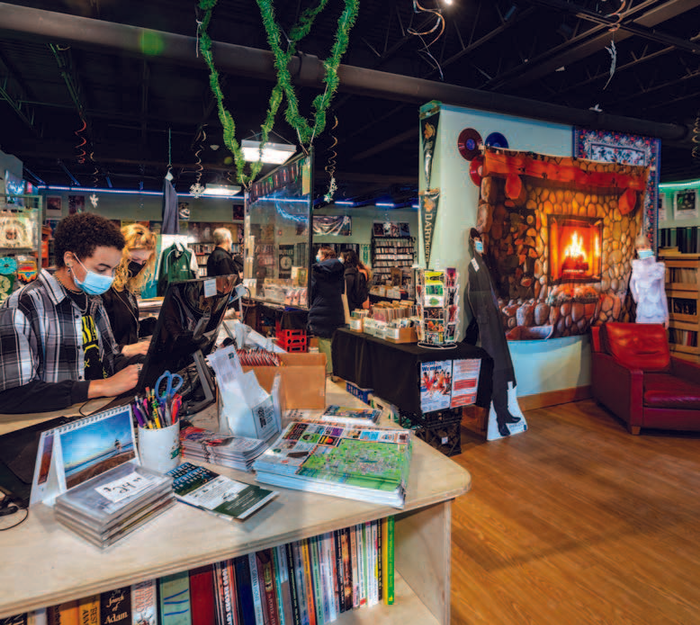 The ever-changing welcome wall invites you to sit and have your picture taken with celebrities’ cutouts.

Bryan, who grew up in Hanover, was always interested in music and performance art. He started the Hanover High Soar Throats a cappella group when he was in high school. He says he was inspired by his uncle, who started the Dartmouth Aires a cappella group. Eight members of his family have attended Dartmouth, and Bryan’s grandmother donated the Paddock Music Library. “My grandmother exposed me to all kinds of music growing up,” Bryan says, which explains why he’s able to answer customers’ questions about almost any music genre. And he notes that the number of customers has greatly increased since the store changed locations.

“I have a lot more foot traffic here,” Bryan says of the store’s new home located in the middle of Main Street in the Arcade building. He gets customers who come in and say they wish the store had been around when they were going to Dartmouth, not realizing that it had been 100 yards away, behind and below Starbucks on Lebanon Street. At that time, it was called IDVD (International DVD) and Posters, and Bryan was hired there in 2003 because of his music and movie acumen.
By 2009, DVD sales were starting to drop, but in 2010 records made a comeback, and Bryan, who by then had become the manager of the store, began switching to a new focus. Still, he heard people musing as they were walking by his open door, “How is this store still in business?” This was one reason he finally decided to change the name of the store to rpmNH because the focus was more on records at that point than DVDs. He credits his sister, Cutty Smith, with coming up with the new name.
When all business slowed down due to COVID in 2020, original owner Ken Gorlin decided to retire, and after some soul searching, Bryan decided that this business was where he loved to be and purchased it. He feels lucky to have the current space, but he recognizes that parking is difficult, and that’s why he’s open until 9pm and on Sundays when parking is free.
No matter where his location, he says, “Record people are drawn to the shop like Pavlov’s dog. They see records, and they need to come in. Although record companies are now releasing new vinyl, collectors want originals. We are the only ones who do what we do with records within a 60-mile radius.”
Always the environmentalist and patron of the arts, Bryan has rehomed the poorer quality vinyl records he comes across. “I have given away over a thousand records to student art projects,” he says. The store sells some of this painted vinyl, an innovative retro décor idea. Bryan hopes to find the time to paint some records himself with flowers for his flower boxes in the summer, a sign he’s looking to form roots in his new location.
In his early adult years, Bryan traveled the world, working on cruise ships and teaching ballroom dancing, among other duties. “I don’t have to go all over the world anymore. The world comes to me,” he says. He loves asking his customers, many of them former, current, or prospective Dartmouth students, this question: “Where are you from?”
“I enjoy doing this,” says Bryan, who hasn’t missed a day of work since his new location opened in April 2021. His smile reaches his
eyes above his mask. “I enjoy working with the students.”