The Dartmouth heavyweight group rows against Williams on the Connecticut River on May 15, 2021. Photo by Doug Austin.

Dartmouth College students have been rowing since the 1830s; it’s been a men’s varsity sport since 1957. And why not? The college is minutes from the banks of one of the best stretches of moving flatwater in the country—the Connecticut River. “You can row for miles,” says Sean Ward, ’21, who competed on the rowing team all four years and who served as team captain as a senior. Legendary coach Dan Roock, who has coached the sport since 1984 at World Championships, World Cups, at Princeton, Cornell, and is currently in his second stint at Dartmouth, agrees with Sean’s assessment. “We have this wonderful river,” he says. 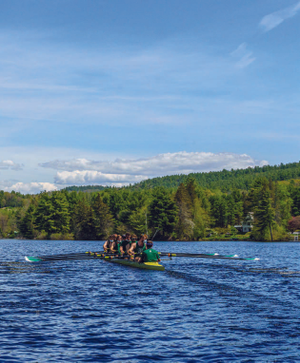 The Dartmouth heavyweight group rows against Williams on the Connecticut River on May 15, 2021. Photo by Doug Austin.

The rowing program at the college is about more than just the river, however. The program has top-flight coaches like Dan, Wyatt Allen (a former Olympian), and veteran women’s coach Nancy LaRocque in addition to a team of assistant and volunteer coaches. It attracts smart and coachable athletes like Sean, who attests that crew was at the center of his Dartmouth experience despite the fact that he chose the school for the academics. And the program has great facilities because a 21st-century collegiate level athletic program has to feature year-round training opportunities in order to have the strongest, most fit, best-prepared athletes. 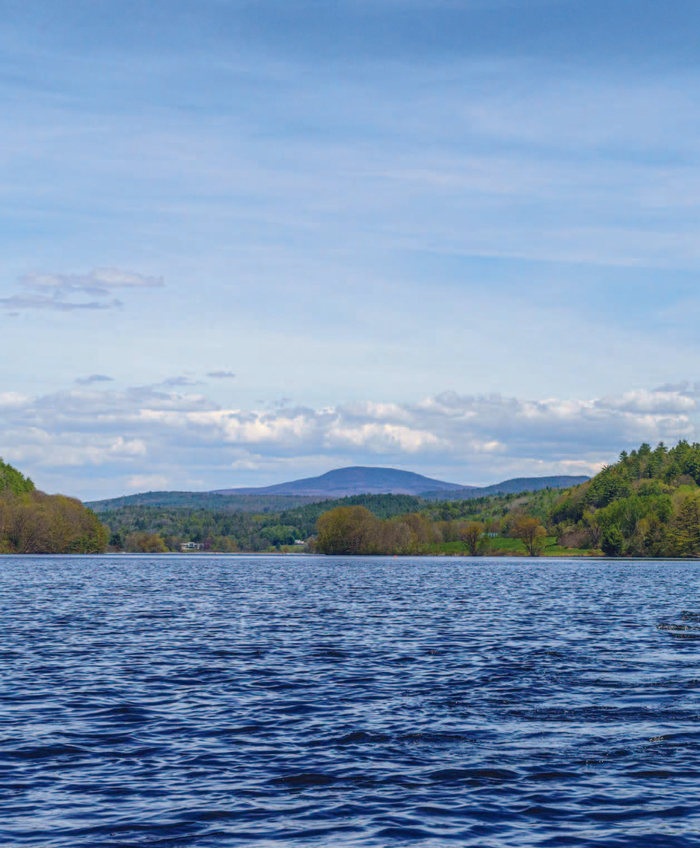 Minutes from campus, the mighty Connecticut winds its way between Vermont and New Hampshire. Here, the Dartmouth crews can launch straight from their own boathouse. “Everyone is good at something,” says Dan, who holds undergraduate and master’s degrees in engineering. “My strength is watching people row and knowing whether they have the potential to go fast.”

And they do go fast, aboard everything from singles to eight-person boats. In fact, in the past two years—that is, during times of pandemic—amid concerns about crowded shuttle vehicles and other apprehensions about health and safety, the teams have utilized one- and two-person boats more than ever before. Sure, the goal is for the larger teams to get used to rowing together and to improve camaraderie and teamwork. But in the larger picture, if the best you can get is small groups, Dan will take it. Even as recently as fall 2021, the teams did a lot of singles and doubles work. “There’s plenty to work on in regard to technique,” says Dan. “We had fun and improved.” 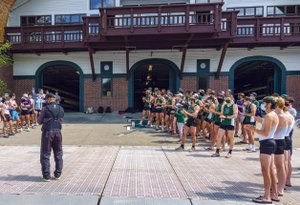 Wyatt Allen, who is the Betsy and Mark Gates 1959 head coach of men’s heavyweight rowing addresses Dartmouth and Williams before their races. Photo by Doug Austin.

Women’s coach Nancy LaRocque appreciates that women’s rowing has been a varsity sport since 1997. Although it doesn’t get much fanfare decades after its unveiling, Nancy recognizes the opportunities in women’s athletics that came as a result of the Title IX legislation in the 1970s. “Statistics show the direct correlations between women in athletics and increased self-esteem and decreased drug use, unplanned pregnancies, and so on,” she says.

The setting and atmosphere around rowing at Dartmouth is so positive and inclusive that Nancy, in her 19th year as a coach (and second year at Dartmouth), refers to it as “Camp Dartmouth.” She recently met with Dartmouth head football coach Buddy Teevens during football season for a brainstorming session around recruiting top athletes. “As a coach, I feel support from all sides,” she says.
Meanwhile, she reports that this year’s team is fully invested in this year’s goals. And their confidence only grows as they begin to see tangible results. For example, the women lost to Boston College and UMass at a race in the spring of 2020. “We raced them after fall training,” she says, “and beat them pretty good.” The women’s team, says Nancy, is coachable and dying to get back on course after missing much of the last year during the pandemic.
Men’s lightweight rowing experienced a recent speed bump: in the summer of 2020, Dartmouth eliminated the program . . . briefly. Dartmouth alumni for whom—much like Sean—rowing had been central to their college experiences mobilized, voiced their support, and rescued the program, which was reinstated before the school year started. “It wasn’t my favorite thing,” says Sean. “But the support was unbelievable. It was a definite highlight.”
Because Dartmouth is so rigorous academically, participation in a sport is a major challenge. “The discipline that the sport demanded helped me thrive academically and now in my job,” Sean says. “It’s all about time management.”

Although the three teams, which include men’s heavyweight (over 160 pounds), men’s lightweight, and women’s, are separate, there is much collaboration, sharing of facilities, and teamwork among the coaches and athletes. Speaking of facilities, the Friends of Dartmouth Rowing House got a $7.5 million addition in 2019. In addition to training equipment, the facilities include “Erg rooms” (that is, rooms with ergometers, or rowing machines to a layperson), and—most importantly—water tanks with moving water that simulates the moving currents in an actual river. “It’s not the same as rowing in the river, but you can really get a lot done,” says Dan. 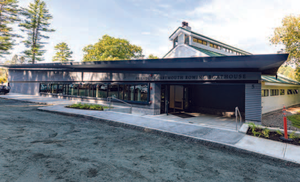 The new entrance to the renovated Friends of Dartmouth Rowing House on dedication day. Photo by Lars Blackmore.

With the Friends of Dartmouth Rowing House facility, athletes can train for their specific sports all winter, knowing that they get out what they put in. Yes, it’s an overused team-sports cliché, but with rowing, even more that most other team sports, the tired old truisms really do apply: everyone pulls in the same direction; like an orchestra, all instruments need to be in tune. And the most applicable and obvious cliché about rowing: “We’re all in the same boat,” says Dan.

“If you don’t work together with the people in your boat, you’re just not going to move or make progress,” adds Sean. Sean would know; relatively new to the sport when he came out of high school, he joined the Dartmouth program as a walk-on. He worked hard (“Apparently Coach Roock saw me as someone with potential,” he muses), and qualified and competed in the 2021 World Championships in the Czech Republic with Dartmouth teammates Jack Stone, Cooper Tuckerman, and Chris Stich last July. “He worked and got better and better,” says Dan. “Sean epitomizes what we hope all our athletes can achieve.” The team actually met Dan at his home near a pond in Craftsbury, Vermont, for a final tune-up before heading to Europe, where they were accompanied by longtime Dartmouth assistant rowing coach Trevor Michelson (who Dan describes as “probably the true spirit leader” of the men’s lightweight team).
As a recent graduate, Sean hopes that current and future Dartmouth rowers recognize the privilege and good fortune of participating in the program. “We realized this when our program got cut and then reinstated,” he says. “But it’s a special experience that isn’t easily replicated when you leave the sport and leave Dartmouth.” 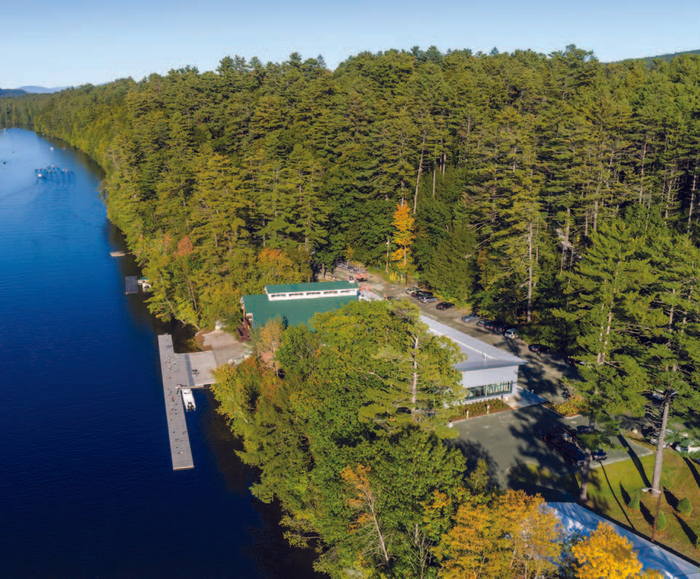 Aerial shot of the Friends of Dartmouth Rowing House on the Connecticut River on dedication day in 2021. Photo by Lars Blackmore.

And this spring the current team will be out at sunset dipping and pulling their oars in the waters of the Connecticut. Because, after all, says Dan, “In the end, we just really love making boats go fast in the water.”