A Weekend at Wachusett: Big-Mountain Skiing With A Family Vibe Perhaps you love to ski or snowboard and want to try someplace different, away from the Upper Valley, yet not too far and with enough variety to keep it interesting for more than a run or two. If you’re like most skiers and riders, your wish list for this destination probably includes modern mountain amenities like a comfortable base lodge, good food, fast lifts, and reliable snow. Fair enough. A reasonably priced lift ticket and parking close to the lodge would sweeten the deal. If you’ve got a family, the place would need kid-cool features like terrain parks and fun stuff for little tikes, depending on their ages. Even if you don’t have kids, a friendly atmosphere is a must, and a lively apres-ski scene is a bonus. You’ve just wished for Wachusett Mountain Ski Area in Princeton, Massachusetts.

Wachusett is just over 100 miles (about two hours) by car from White River Junction, so about as far away as many destination ski resorts in Vermont and New Hampshire, depending on where you live, maybe closer. If you’re planning a trip to Boston this winter and want to ski for a half day, going or returning, Wachusett is a perfect place for a pitstop, not just because of its location west of Boston but also because you don’t have to buy a full-day ticket for only a few hours on the slopes.

Take your pick which hours. The mountain splits the day into four sessions—morning, afternoon, after work/dinner time, and evenings, with a lift ticket option for each of those time periods. And they groom twice daily to ensure skiers on the later shifts have the same chance at carving corduroy as the eager early birds who wait for the lifts to open each morning. 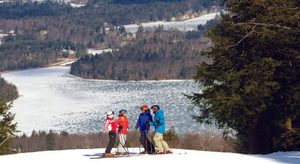 Views from the mountain include Wachusett reservoir, Worcester to the south, the mountains of Vermont and New Hampshire to the north, and all the way to Boston to the east!

“Our tagline has always been ‘mountain skiing minutes away,’” says Chris Stimpson, public relations manager for Wachusett Mountain Ski Area. “It feels like you’re in the mountains here, even though you’re in close proximity to Boston and Worcester.”

Though often considered part of the Berkshires because it’s in Massachusetts, Wachusett Mountain (elevation 2,060 feet) is geologically a Monadnock, a stand-alone peak similar to Mount Ascutney in Vermont or Mount Monadnock in New Hampshire. It’s the highest point in Massachusetts east of the Connecticut River. While only half the size of many peaks in the White Mountains and a lot lower than Mount Greylock (3,491 feet), the highest peak in Massachusetts, it’s a magnet for skiers in Massachusetts, Connecticut, and Rhode Island for its 27 trails and 110 skiable acres.
By comparison, Wachusett is slightly bigger than the Dartmouth Skiway in terms of vertical drop (1,000 feet versus 975 feet) and skiable acres (110 acres versus 104 acres), but the similarities end there. For starters, Wachusett has 100 percent snowmaking coverage and is constantly upgrading its snow system.

“Snow quality is crucial to operations here,” Chris explains. “We invest every year in our snowmaking. We can pump up to 9,000 gallons of water per minute and our snow guns are new and highly efficient, using less air. It takes us about two to three cold nights to open a [bare] trail, and we can recover quickly if it gets warm and rains. We crank out the snow!” 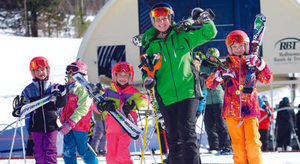 Wachusett’s twice-a-day grooming ensures that the trails are always in the best shape possible.

Wachusett Mountain places such a high priority on its snow because skiing is its main business. It always has been, and it’s the main reason to give the ski area a try, regardless of your age or ability level. Wachusett’s snowsports school teaches kids to ski as young as age four. 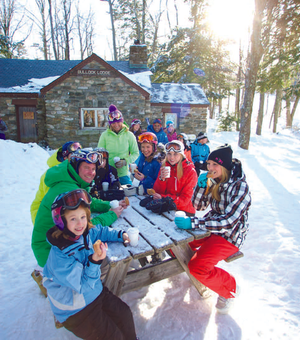 Warm-up with a hot cider and an apple cider donut at Bullock Lodge Cider House located off of the 10th Mountain Trail.

“Polar Kids is for ages four to eight,” says Chris. “We make it as fun as possible so they’ll want to keep doing it. That lets parents also enjoy their time on the hill, too.”

Like at other ski areas, children can then work their way through lesson progressions for older and older age groups. Adults can take lessons, too, of course, and rent gear or just hang out in the roomy multilevel base lodge, where there’s not only a cafeteria but also a coffee shop, a wine bar, a pub-style restaurant, a lounge serving Wachusett beers and other local brews, and the Core, operated by an apple farm from nearby Phillipston that serves apple products, cider donuts, fudge, candy, and other quick-grab treats.
Wachusett also serves up a lot of public ski racing. A dual NASTAR runs daily, melding into a vibrant adult race-league scene each evening. If the terrain park is more your style, you could jump into a local rail jam, or during the springtime “slush cup,” play HORSE, in which one person demonstrates a trick, then the next person has to copy it.

That said, if you just want to ski, there’s plenty of it. From the top of the Polar Express Quad, Wachusett’s two signature black-diamond trails, Smith Walton and 10th Mountain, dive down the mountain, both with pitches that earn any expert’s respect. Smith Walton, in particular, is a favorite, not only for its upper steep sections but also because as it mellows, it entertains you with its wide, rolling terrain. Even if the top of your run was ragged, you always ski onto the lift feeling like a hero.
For others, Connifer and several other intermediate runs also curl down from the summit. Another high-speed quad, the Minuteman Express, takes you to the NASTAR hill and a few other intermediates trails. And if you’re a beginner or simply want to take it easy, yet another high-speed lift, the Monadnock Express, takes you to several “green circles” (easy trails) set apart from the rest of the mountain. 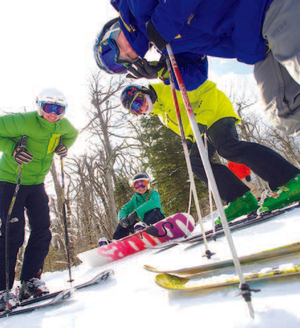 There is terrain to be found for skiers and riders of every ability level at Wachusett.

Wachusett skis bigger than its stats reveal, mainly due to the vision, spirit, and staying power of its owners. Chris’s grandfather, Ralph Crowley, Sr., cofounded the ski area with his brother David in 1968, and it has been in the Crowley family ever since. Today, the Crowleys remain intimately involved in a number of ways. For example, Chris is the son of Carolyn Crowley Stimpson, vice president, who runs the mountain with her brother (Chris’ uncle), Jeff Crowley, president. Chris’ cousin, David Crowley, Jr., is the manager of base-lodge operations, and Jeff’s daughter, Courtney Crowley, works in group sales. In other words, the mountain has been in the Crowley family since it started and has stayed there for three generations.

“We’re a local ski area, where the owners get to know you by name, but with big-mountain characteristics,” says Chris. “It feels like home here. There’s a family vibe. You may run into Carolyn in the base lodge, and Jeff might be on the chairlift next to you.”

Nowadays, it’s rare for a ski area of any size to be family owned and operated. This family connection, which has continued for over five decades, is a big reason why Wachusett is a special place to make turns. “We’re committed to being a family-run mountain and doing the best we can for our customers, who are also our friends,” says Chris.
In 2018, in a video for Wachusett’s 50th anniversary, Carolyn Stimpson characterized Wachusett as a tiny ski area that barely kept the T-bars running that has grown into a real jewel of the ski industry. Why? The Crowley family’s influence, for sure, but mainly because it remains a fine place to make a few turns. As Upper Valley skiers, we tend to look east, west, or north for places to ski on a quick getaway. With Wachusett, you’ve got an option to the south, too. I

Wachusett by the Numbers 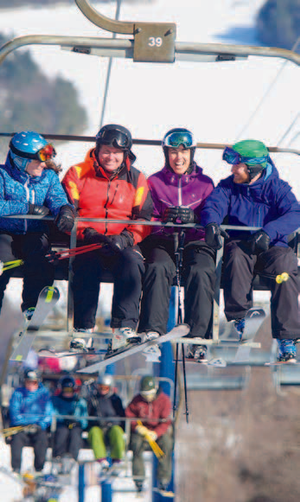 9,200 Skiers per hour that the mountain’s lifts can handle (uphill capacity)

1,000 Vertical drop in feet from the summit to the base area