Diving into Downhill: A Peek Inside One Racer’s Head A downhill racer on a flat section of a course in a tuck. The fastest tuck is aerodynamic like an airplane wing, sending air over the racer's back.

This February, as we tune into the 2022 Winter Olympic Games in Beijing, China, one event is sure to capture big ratings: the men’s and women’s downhill races. Downhill is an alpine skiing event in which racers can exceed speeds of 85 miles per hour as they rush down a course that challenges with its nuances in terrain, high-speed turns, and airtime.

It’s a thrill to watch these athletes in their daring pursuit of gold and glory in a competition fraught with danger. Catching an edge, a binding that accidentally unclicks, or a misjudgment of line could result in serious injury or death, yet these highly trained racers willingly push themselves to the edge of control, literally risking it all, in hopes of standing atop the podium. 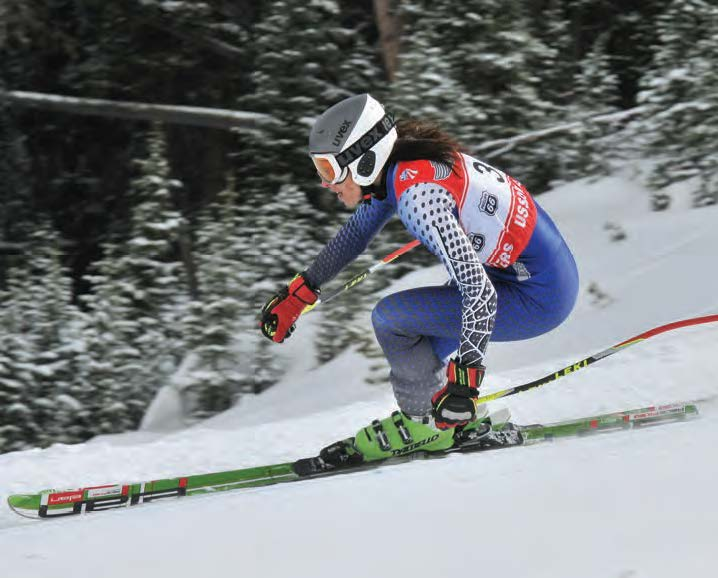 The author competes in the 2016 US Alpine Masters Championship downhill. Racers can continue to compete in downhill for life, or as long as they dare, on the masters circuit.

Have you ever wondered what it would be like to be inside the head of a downhill racer as they barrel down a course? I used to specialize in downhill as a member of the US Ski Team and then spent 20 years commentating about it on various television networks. While every athlete approaches a ski race in their own way, here’s a peek inside one racer’s head (mine) from start to finish. 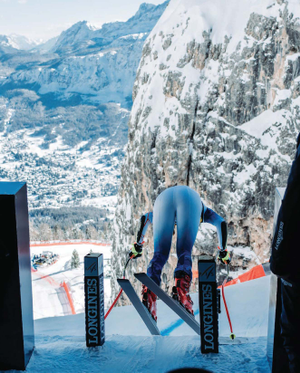 A US Ski Team athlete charges out of the starting gate on the World Cup in Europe. Photo courtesy of US Ski and Snowboard Team.

I watch the ski racer ahead of me blast out of the starting gate, then slide forward into the spot that she just dove out of, as the starter flips an 18-inch, shin-high “wand” closed in front of me. My heart pounds. I’m nervous but excited as I exhale, then rub my skis back and forth, testing their slickness against the snow.

I carefully place my ski poles over the wand, which if bumped, would trigger the clock that times each racer to the hundredth of a second. “Hundies count,” I remind myself. The saying, coined by former US Ski Team Member and Olympic downhiller Daron Rahlves, is embedded in the narrow flap of fabric behind the zipper of my skintight, multicolored speed suit, with “USA” boldly emblazoned up both thighs. Downhill ski racers speed down two miles of unrelenting trail, yet races are often determined by a hundredth of a second, perhaps a ski tip if one were to measure it. Every moment, from start to finish, counts.

“Number 12 in the gate,” announces the starter into a headset. I plant my poles firmly on the downhill side of the wand, testing that I’ve got a good platform for the biggest push I can muster while ensuring my cone-shaped, aerodynamic ski pole baskets don’t get stuck where they’re planted.

To my right, a digital timer shows 10 seconds as it gives off a sharp tone, telling me to get ready. I exhale again, peering down the course. “Look ahead,” I repeat to myself. I look down the hill, focusing on the slope and the two gates I can see in front of me.

The timer begins its five-second count down. 5, 4, 3 . . . With each tone, my body coils like a cougar ready to pounce. I don’t need to start exactly on “go,” but I must leave the gate during the countdown or within five seconds after it.

Like an explosion, I blast out of the start. Of course, there’s no real explosion, just a burst of energy as I burst onto the course. One push. Another push. I drop into my tuck, pressing forward, accelerating to 65 miles per hour as I edge a little, giving more weight to my right foot around a shallow turn. 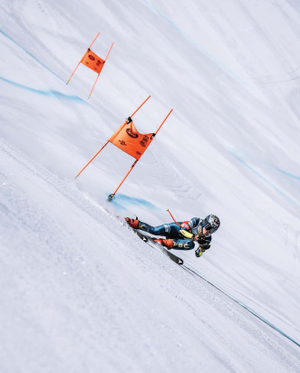 I gain another five miles per hour, welcoming the speed. The wind pushes against me, trying to knock me backward, but I push forward harder. The course comes quickly now, rushing at me. Traveling at 20 miles per hour faster than I drive my car on most roads in Vermont, I have to react immediately to a turn or a jump that I see down the slope, or it will be too late. There’s no time to plan my next move. I already know it from training. I remind myself again to look ahead. “Go! Go! Faster!” echoes through my head.

I see a jump coming and thrust my hands to my feet, using my stomach muscles to keep my knees to my chest as I soar through the air. I touch down and slam weight to my left ski to arc around a turn. “Nailed it,” I think, fleetingly, as I fight for my tuck again.

The course is rough and fast. “Stay forward,” I coach myself, looking for the next tricky element in the course, a blind turn. There!

“Two o’clock,” I coach myself, referring to the direction that I want my skis to point as I drop over the blind knoll. Noon is always straight down the hill. This is big turn to the right.

Then the earth falls away. My skis buck like a bronco just released from a rodeo pen. “Stand on it!” my inner self shouts, referring to my left ski, the outside (downhill) ski, then the right ski as the course changes direction again. The speed combined with the undulating course, terrain, and turns is more than I can handle in a tuck, but I stay as low as I can, driving my hands forward. I hang onto my outside ski with everything I’ve got. Part of me is scared at this unforgiving ride, but there’s no stopping me. Total commitment is not only faster but safer.

I concentrate on staying forward and letting my skis run. I round another turn, feeling the edge of my outside ski bite into the icy track. Skidding is slow. Hundies count, and if my weight rocks to my heels, I’ll be in the fence. Go for it! Drive down the hill! Yeehaw!

Whoosh! I’m in the air again, thrusting my hands toward my toes, then dropping back to earth. I grab my tuck, looking for more speed, but every little bump and roll tries to knock me out of it. Ahead, the steep pitch I’m barreling is about to flatten out. The transition, called a “compression” in ski racing terms, is one of the toughest spots in the course. My legs are tired, yet I need to withstand a couple of g-forces. I raise up in my tuck and press forward as gravity sucks my knees instantly into my armpits and tries to pull me onto my heels. The track mellows as I barrel onto the flats, but it’s no time to let up. The trick is to ride my skis as flat as possible on the snow. They make a humming sound. I know I’m going fast. They also feel washy from side to side. That’s good, too. It means I’m riding flat skis, the key to a fast glide, but it feels so insecure. All I want is a little edge to calm them down, but no, that’s slow. “Forward. Balance,” I tell myself.

Then the earth drops away again. The last jump. I land, grab my tuck, and press towards the finish line.

It’s over. I’m out of breath, spent. My legs shake. I’m awash in relief. I made it. Every run of downhill is a rush. I glance at my time as I recover from the wild ride. So far so good—first place by 0.03 seconds. Hundies do indeed count, but will it be enough with the rest of the field yet to go? Only time will tell.