There are plenty of great schools in the Upper Valley. But for the families of 130 area kindergartners through eighth-graders, Crossroads Academy, an independent, coeducational elementary and middle school with a commitment to academic excellence and moral integrity, is their school of choice. Founded in 1991 by Mary Beth Klee, the school's mission to inspire students to love learning, to act honorably, and to actively contribute to intellectual, cultural, and civic life, is based on two philosophies: Core Knowledge and Core Virtues.

“Part of the reason I founded the school was to ensure that a sequenced, substantive, content-rich curriculum was available to Upper Valley students,” says Mary Beth, trustee emeritus on Crossroads’ board of trustees and first Head of School. “The culture of the school is warm, caring, and supportive but demanding,” she says. “And the students are eager, articulate learners who just eat up the great stuff they’re learning.” 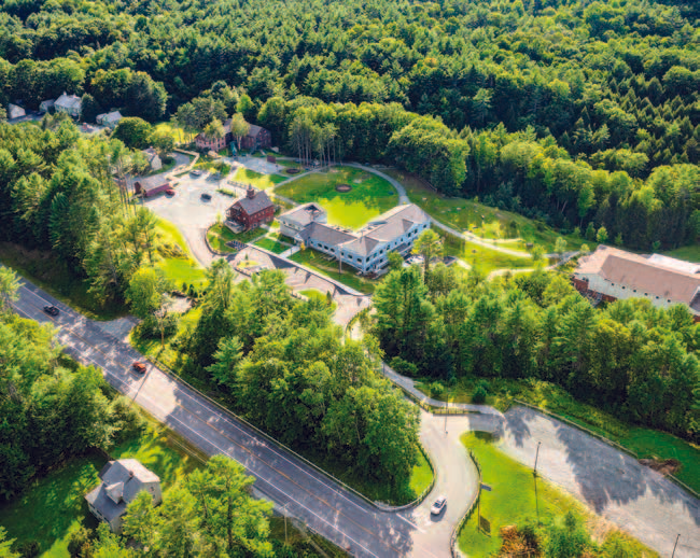 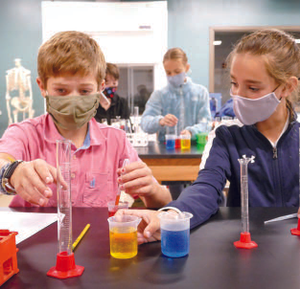 In the late 1980s, the educational theorist E.D. Hirsch, concerned and dismayed about the skill and knowledge levels of American college students, established a curriculum called Core Knowledge—a philosophy based on the idea that educational excellence is based on knowledge that can be learned starting at a young age. “Crossroads was one of the first three schools in the country to adopt the Core Knowledge curriculum,” explains Mary Beth, whose son was one of Crossroads’ original kindergarteners when Crossroads first set up shop in the basement of St. Denis Catholic Church in Hanover. The Core Knowledge curriculum is not easy. Rather, says Crossroads Academy Head of School Dan Morrissey, “It is extremely rigorous and fast-paced.” And that is the point: “By the time students reach eighth grade,” Dan says, “they have a rich, deep, and diverse knowledge of US history, language arts, science, and math.”Within three years, Crossroads outgrew the church basement and moved to its current location on the Dartmouth College Highway in Lyme. Having established a school based on a highly rigorous academic curriculum, Mary Beth developed a corresponding philosophy that completes the Crossroads Academy mission: Core Virtues. It’s not enough to have the knowledge; Crossroads students also learn that what you do with that knowledge, and how you treat others, matters greatly. The Core Virtues include respect, responsibility, diligence, perseverance, generosity, and courage, among others. Wrote E.D. Hirsch: “It is a pleasure to see in Core Virtues a program that so capably fulfills the possibilities of the Core Knowledge Sequence.” 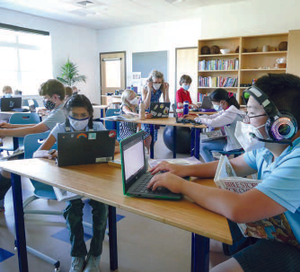 The Crossroads Academy campus consists of the Klee Building for grades K through five, and the brand- new $5.8 million Fanger Center Middle School for grades six through eight (named for the Geisel Medical School’s Professor Michael Fanger, who has partnered meaningfully with the New Hampshire Academy of Science and Crossroads), which opened this fall. Meanwhile, the campus consists of 140 woodland acres. Head of School Dan is well aware of the math: “That’s over an acre per student,” he laughs. Crossroads teachers and faculty of course recognize the value the outdoors has for kids and learn- ing. “We have an outdoor classroom that gets used daily,” says Dan. There is also a 1.2-mile pathway that loops through and around the property and crosses the Hewes Brook. “If school is in session, our kids are getting outside,” says Dan.

The Core Knowledge curriculum is not easy. Rather, says Crossroads Academy Head of School Dan Morrissey, “It is extremely rigorous and fast-paced.” And that is the point: “By the time students reach eighth grade,” Dan says, “they have a rich, deep, and diverse knowledge of US history, language arts, science, and math.” with its strong curriculum and conducive-to-learning setting, Crossroads faculty complete the puzzle. “We have an incredible faculty dedicated to developing strong minds and kind hearts,” says Dan. “They are demanding, and they hold children accountable. They are also kind, supportive, and creative.”

What does creative teaching look like? Amy Amell is a parent whose two kids attend Crossroads. “When my daughter was in second grade, her teacher suspended herself from the ceiling to teach the kids about simple machines (pulleys),” says Amy. “I cannot recall this level of creativity from our educators when I was in elementary school.”

STUDENTS ARE ALL IN 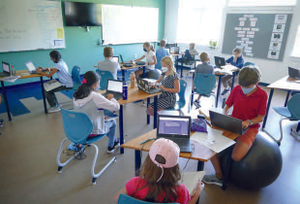 “We enrolled our kids at Crossroads because we were impressed with what a well-rounded education they would receive. The Core Knowledge curriculum prepares our kids for academic success in the future,” Amy says, noting the school’s emphasis on early reading and writing skills, high-level math at a young age, and seminar-style discussions in elementary school.

You may wonder how it works to introduce subjects like Shakespeare and Chinese history to such young students. Dan explains that

Crossroads teachers hit on subjects in age-appropriate ways and then revisit them in greater depth as students get older. “We’ll introduce Chinese history in second grade,” he says. “They’ll hit China in more depth in fourth grade and in great depth in seventh.” Learning at Crossroads isn’t all serious work, however. Fourth-grader Maddy Amell isn’t afraid to work hard, but she knows help is always available. “Teachers at

Crossroads are really happy to help you if the topic seems hard,” Maddy says. “The school may look serious on the outside, but we have a lot of fun.” Maddy notes that school high- lights for her have been theater and acting; her class performed a production of Robin Hood this fall, and she recalls dancing with a classmate to “Stayin’ Alive” at a Family Arts Night. While  Crossroads   Academy has an excellent record of placing students in top high schools and colleges, that’s not the only goal.

Crossroads also strives to produce conscientious, respectful, and productive people. “Crossroads students do not arrive at middle school and high school with a shoulder-shrugging ‘meh’ approach to academics,” says Mary Beth. Rather, they are engaged, learners. “They’re all in,” she says. “And they are constructive builders of a positive future.”