The Olympics Closer To Home: Discover Your Inner Olympian At Lake Placid This February, all eyes in winter sports turn to the Winter Olympics in Beijing, China, where 3,000 athletes will compete in 109 sports. The Olympics are always a riveting spectacle of human grit and performance on the world stage, with 18 million television viewers on NBC alone. This winter, Hanover sports fans will enjoy listening to US Ski Hall of Famer and Upper Valley native Jeff Hastings call the ski jumping action and watching former Ford Sayre skier, Mikaela Shiffrin, try to add a few more medals to her glittering career on the ski slopes. They’re just two of many Olympians with connections to the Hanover area.


Have you ever wished for an Olympic experience yourself? You can have one this winter, regardless of your age or athletic ability, and much closer to the Upper Valley than Beijing. Lake Placid, about three hours away in Upstate New York, is the only place in the world to host two Winter Olympic Games, in 1932 and 1980. The 1980 Winter Games were one of the last Olympics in which the venues were concentrated within a 10- mile radius of the host town, which makes it easy to get a taste of a number of Olympic sports. I grew up in Lake Placid, and though I never competed in an Olympics, I’m grateful for the chance to sample a piece of them each time I return. 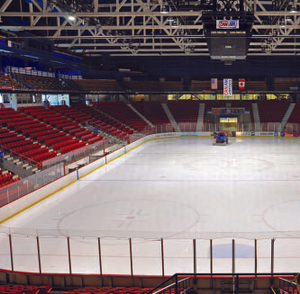 Herb Brooks Arena Site of The 1980 Miracle on Ice

My father was a skier and my mother was a figure skater, so I did both sports as a kid. Each day after school, I would head to the Olympic arena to skate. I gave up competitive figure skating at age 11, but still enjoy gliding around a rink now and again. In Lake Placid, there are multiple ways to get ice time during the winter, whether you’re in the mood for carving figure eights, whacking a hockey puck, or striding as fast as you can.

The Olympic arena, built-in 1932 and greatly expanded for the 1980 Games, has three indoor ice sheets where you can figure skate, play hockey, try curling, or watch more serious competitors practice and compete.

Outside, there’s public skating on the Olympic speed- skating oval beside the arena and on Mirror Lake in the middle of town after the ice thickens. 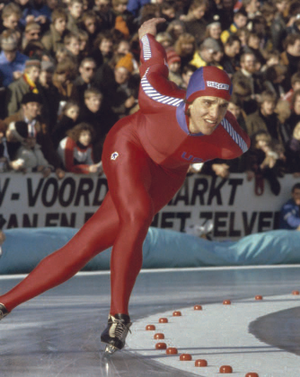 Whenever I visit Lake Placid with friends who have never been there before, my first stop is always the Olympic arena. The 1932 rink is interesting for its history, but there’s something about standing in the larger Herb Brooks Arena, named for the coach of the 1980 US Olympic hockey team, that moves your soul.

In the semifinals of the 1980 Olympic hockey tournament, Team USA, composed of a scrappy, determined group of college hockey players, defeated the Russians, the favorites to win the gold. The game, known as “the Miracle on Ice,” is now one of the most famous moments in sports. A Dartmouth student at the time, I remember watching the game in a fraternity “tube room.” The house went wild, along with the rest of the country, as the Americans held the Russians to a score of four to three in the final minute. 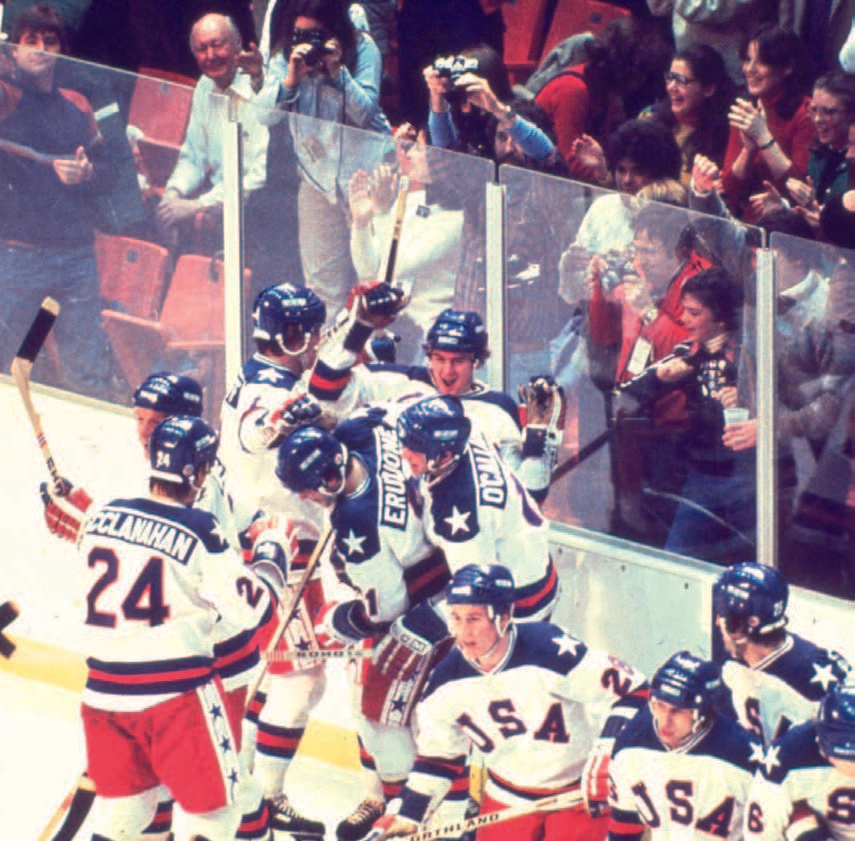 The doors to the stands surrounding the rink are usually open. I’ve poked my head in there when the arena is empty and the ice is clean and smooth, poised for action. In those moments, the arena exudes a vibe of victory and patriotic enthusiasm. I’m transported back to 1980 and stand among the 8,000 fans cheering madly as the clock ticks down to zero. The other sheet of ice that still gives me goosebumps, and not from the cold, is the speed-skating oval. It was on this glassy, outdoor loop beside the arena that Eric Heiden won an unprecedented five Olympic gold medals of which four were new world records and one was an Olympic record. My family has a tradition of joining the public skating session on New Year’s Eve on the speed-skating oval. With each scritch of my old figure skating blades as I stride along, testing my tolerance for a few more miles per hour, I imagine Heiden in his aerodynamic tuck, accelerating around the turns and sprinting to the finish.

Olympic skiers accelerate around turns, too, but on snow. Ski racing is my first love, and I learned to do it at Whiteface Mountain in the years leading up to the 1980 Winter Olympics, then watched on crutches with envy as my peers pushed the envelope in downhill, slalom, and giant slalom during the Winter Games. Super G did not exist yet. Freestyle moguls and aerials were still 12 years away from becoming Olympic sports. Skiercross, slopestyle, and half-pipe had not been invented, nor had the sport of snowboarding. Downhill was definitely the darling of the skiing events. 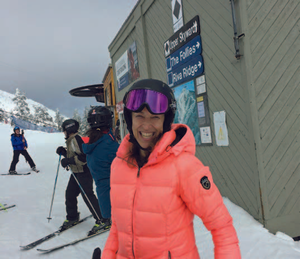 LISA BALLARD BY THE START OF THE 1980 MEN’S DOWNHILL

Last winter, I spent a weekend skiing at Whiteface during which I ventured to the top of the mountain. Just off the top of the chairlift is the spot where Leonhard Stock, a longshot from Austria, pushed out of the starting gate, then proceeded to lay down the run of his life for the gold. The idea of tucking down two consecutive headwalls  known Niagara and Victoria after two of the world’s largest waterfalls is not something my head or legs could handle today, though standing there, I sense the speed and go-for-it attitude that Stock mustered to win the Olympic downhill.

The international sports of cross-country skiing and biathlon are also on the menu in Lake Placid, at Mount Van Hoevenberg. During the 1980 Winter Olympics, several athletes with ties to the Upper Valley and Dartmouth College raced in cross-country and biathlon, including Tim Caldwell, Doug Peterson, and Don Nielson. Similar to alpine skiing at Whiteface, anyone can buy a trail pass and ski on the Nordic trails at Van Hoevenberg and learn how to shoot accurately while doing it in the case of biathlon. 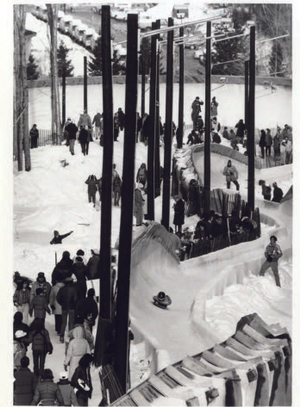 Mount Van Hoevenberg was also the site of the sledding events in 1980. There were two bobsled and luge. Both American teams were heavily peppered with locals, primarily because there were only a couple of bobsled tracks in North America.

For women, the widespread notion around town was, if you want to make the Olympic team, learn to luge. Back then, it was a new sport for women, and few did it. I had already hung my helmet on ski racing, so despite a number of invitations to take a ride in a bobsled or on a luge sled, I never did. I finally got my chance a couple of years ago. 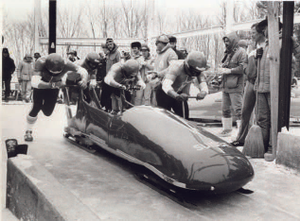 Sitting behind the driver and snugged up to the person just behind me in a four-person bobsled on the 1932 track, there was no sprint, just a push from the attendant. “Keep your hands and feet in the sled,” he shouted as we hunkered behind the driver.

Even without our contribution to the start, we quickly picked up speed. The sled rattled as the walls of the track blurred beside us. The g-forces of each turn threatened to suck us through the bottom of the sled. I prayed we wouldn’t tip over or go soaring off the tall, banked walls as we sped along like a rocket ship careen- ing left and right to avoid asteroids. It was over in a couple of minutes, though it took an hour for the adrenaline to subside.

Alpine skiing was not an Olympic sport in 1932. There were only 14 events, including bobsledding, ice hockey, figure skating, speed skating (for men only; women’s speed skating was only a demonstration event), cross-country skiing, ski jumping, and Nordic combined. Ski jumping was the premiere draw for spectators. The Norwegians dominated the individual competition on a 61-meter hill, win- ning gold, silver, and bronze. Casper Oimoen, a Norwegian-born American, place fifth.

By 1980, the size of the “big hill” doubled to 120 meters. Walter Malmquist of Fairlee, Vermont, and Dartmouth College, finished in the middle of the pack in 27th, but soared to a thrilling second in the jumping portion of the Nordic combined competition. He couldn’t hold it and dropped back to 12th after the cross-country skiing portion, still a superb performance for an American at the time in that event.

Women’s ski jumping was still 34 years away from becoming an Olym- pic sport. During the era of the 1980 Olympics, the sport was off-limits to women, though the idea of women soaring through the air on skis appealed to my adrenaline-seeking self. I met Malmquist in 1979 and quizzed him why women didn’t jump. “Because your boobs are too big, and your hips are too wide,” he replied. “Women are simply not aerodynamic in the air.”

That was enough for me to keep my skis on the snow, though it didn’t stop me from taking the elevator to the top of the 120-meter jump, 70 feet above the ground, to check it out. Peering down the in-run toward the take-off, I could see how a jumper would accelerate from zero to sixty miles per hour before becoming airborne. The ramp seemed near vertical. Only the very bottom of the out-run (landing hill), where it turns uphill to slow down the jumper, was visible from the starting gate. It took my breath away.

Since 2014, women have ski jumped in the Olympics, though I confess, after looking down the 120-meter jump in Lake Placid, I’m still happy to keep my skis on the snow. Those women have courage, as do all of the athletes who compete in the Olympics. It will be exciting to watch these athletes push their limits in Beijing this winter, but to truly immerse yourself in the spirit of the Games, head to Lake Placid, where you can discover your inner Olympian.