Previous Next
Red Kite Candy - Photos by Lars Blackmore except where noted [15 Images] Click Any Image To Expand
A picture of a child flying a kite, bundled up against the wind, hangs on the sidewall of Mike and Elaine McCabe’s Red Kite Candy storefront on South Street in Hanover. Mike explains how the photo connects to the brand name of their specialty candy business, started in 2009 in their home kitchen in Thetford, Vermont. Elaine wanted the company name to honor her beloved older brother, Stan, who died in his 30s. One of her treasured memories was flying kites with Stan. At the time, Elaine couldn’t remember the color of the kite they had flown together, but she and her family decided that “Red Kite Candy” had a good ring to it. A few years after they started using the elegant retro logo, Elaine’s mother sent her that childhood photo that now hangs, enlarged, on the storefront wall, with Elaine flying a kite that is indeed bright red. 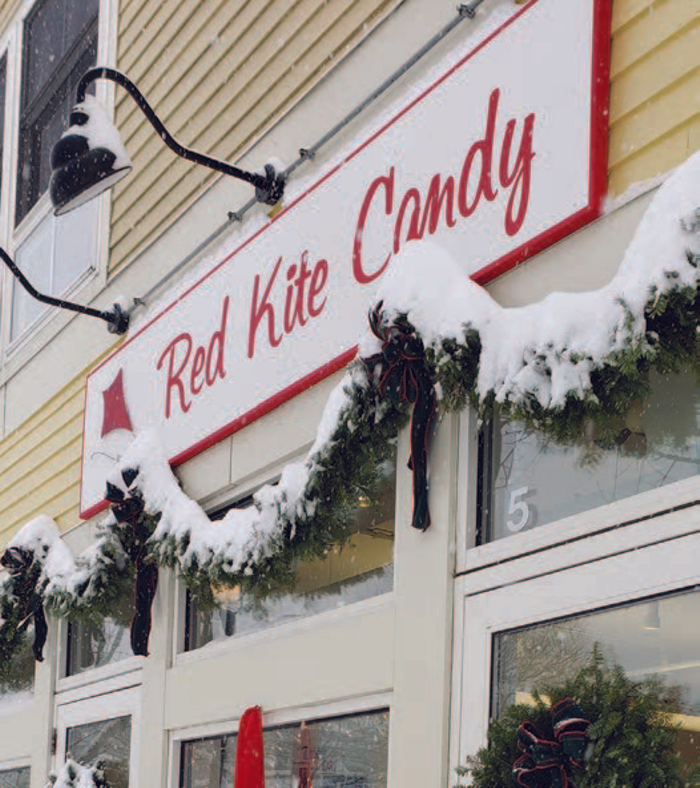 Mike looks away from the photo and relaxes his body further into his chair like a man who doesn’t often have a chance to sit, and who will soon be spending even more time on his feet. Mike and his wife Elaine anticipate a busy holiday season for the family’s candy business in the Hanover storefront, which they opened in October of 2020. He explains that the business sells 10 times as much candy between the months of October through December, and since it is all freshly made, they can’t build up the inventory ahead of time. The caramels do have a shelf life of six weeks and can be frozen—although “fresh is better,” Mike says.

“We are just crazy busy,” he says, but he adds that their attention to customer service will always come first. “When someone walks in our store, we want them to have a great experience. In fact, if you do visit us this year, you’ll probably be greeted by either me, Elaine, or our daughter Caila.”
Gifts for Every Taste 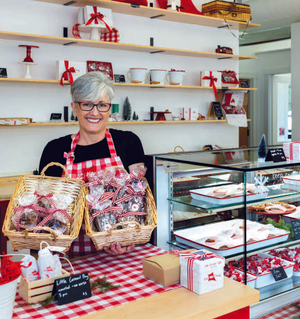 Elaine holds baskets filled with toffee, turtles, and almond bark, all available for the holidays.

One of their most popular holiday products is the dark and white chocolate peppermint bark. “We can’t make that fast enough,” Mike laments. “That one is not sold after Christmas.” Another holiday product is French-style nougat, a classic confection containing honey, pistachios, almonds, and egg white. “It’s beautiful,” he says. “We make our nougat during the cool months because it has to be cool and dry to make the product.” In any season, their signature product remains their caramels, which come in bags, boxes, and in assortments with their other candy. Flavors include sea salt, chocolate sea salt, maple, pecan, salted maple pecan, French toast, and gingerbread for the holidays. “French toast flavor—for the students—that’s the one,” Mike says about the most popular flavor for local young people entering the store. Red Kite Candy also sells toffee and turtles, both dark and milk chocolate.

Delicious New Offerings
Ice cream and toppings have become another popular offering at Red Kite Candy. Available on Friday and Saturday afternoons in the summer, the fresh local vanilla ice cream is covered in the customer’s choice of house-made toppings, such as caramel sauce, chocolate sauce, and crushed toffee bits. “Ice cream definitely brings people in during the summer,” Mike says. “We have learned a lot about what the customers want. It’s going to be exciting to see the next year.” 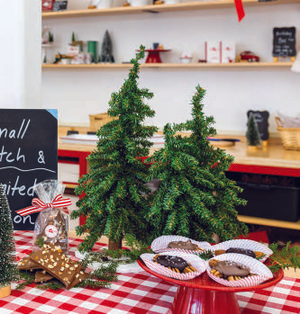 Mike sits up and leans forward when he describes a new product they have been perfecting for the past year. “They are kind of gourmet candy bars,” he says. “Ones that will remind people of familiar candy bar brands, but unlike the ones in the stores, ours don’t have a 12-month shelf-life; they are made fresh with real ingredients you can recognize.” They plan to call the first of a half-dozen varieties the Triple Chocolate Bar.

Community Connections
Although Elaine McCabe first turned her candy-making talents into a business 12 years ago, it has been her lifelong hobby to refine family recipes, one batch at a time. The main ingredients for her caramels are the freshest local milk, cream, and butter from Hatchland Farm in New Hampshire and Kingdom Creamery of Vermont. Sugar is another main ingredient, of course, and Mike hints at a secret ingredient and then changes the subject. He says that in addition to that secret ingredient, they have many tricks that contribute to making sure Red Kite caramels don’t stick to your teeth, which is the problem with most other caramels. “It’s not just the ratio of the major ingredients,” he explains. “It’s the timing of when you add ingredients and how long you take to get to a temperature, and the acidity of the solution. These kinds of things
all matter.”
The McCabes now make their candy in a production facility in Bradford, Vermont, with a small storefront there. They also sell caramels at the local co-ops, Whole Foods in the Boston area, and online, but the new Hanover shop is their first and only “real retail candy store.” They are excited to use the space for small events such as workshops, parties, and team-building events. Activities for the workshops include making custom candy bars for gifts and making ice cream sundaes. For a family that clearly loves giving back to their community, the storefront allows for new ways to connect with the community.
Gifts of Appreciation 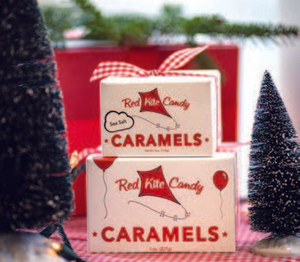 In early 2020, when their plans to open the store in Hanover were delayed due to the COVID-19 pandemic, the McCabes decided to put their energy into sending encouragement to overburdened health care workers in big cities like Boston and New York. They donated tens of thousands of caramels and created a Candy for Frontline Healthcare Workers program in their online store. When customers purchased $25 worth of products, Red Kite Candy sent a box of candy to frontline workers. Customers could also buy an additional box of candy to be sent to the

hospital of their choice. The gifts of appreciation “meant a ton” to the health care and emergency workers, such as paramedics and firefighters, who sent many thank-you cards to the McCabes.
“We were grateful to have the community of customers that we have—they were really great. People loved having a way to help out because they knew the stress that health care workers were under,” Mike says. This year, Red Kite Candy has created a similar online program to thank local hospital workers at CHaD with gifts of their candy. “We recognize that most purchases are given as gifts,” he says with a smile, “that’s why everything has a bow on it.”